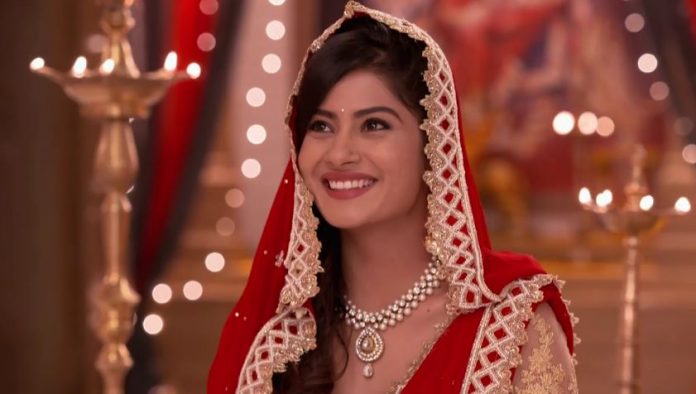 Shagun and Mani want to take Aaliya with them, but Aaliya doesn’t agree to leave Bhallas. Mani asks Shagun not to compel Aaliya. Aaliya doesn’t love Adi anymore. She thinks of the betrayal. She wants to stay with Bhallas so that she can take revenge on Roshni by snatching the baby after the delivery. Mrs. Bhalla thanks Aaliya for understanding her and respecting her wish. Aaliya decides to keep the baby and love him a lot, so that the baby regards her as mother instead Roshni. She wants Ishita to support her again. Meanwhile, Ishita gets a huge shock when Raman visits her. Bhallas and Iyers meet her and tell their wish that they want to take her home so that they can have Roshni and her child along. Ishita gets this bad dream, which is actually turning true.

Raman tells the family that Ishita is taking care of Roshni and she will never agree to send Roshni with us for the sake of the child. Mrs. Bhalla asks Raman to get Roshni home at any cost. He tells her that Ishita will never agree, as they weren’t concerned for Roshni before. Iyers also agree with Bhallas. They find a way to convince Ishita by showing a good future for the child. They decide to keep Roshni’s baby shower ceremony, so that the baby comes home and Roshni leaves from their lives. They don’t have any interest in Roshni. Ishita looks after Roshni. Her dream turns true when she finds Raman and family at the door. They get shagun for Roshni’s baby shower function.

Raman gets tight-lipped and just watches the drama. Mani asks Shagun not to worry for Aaliya much. Shagun doesn’t want Aaliya to suffer in life. She can’t see Aaliya suffering in Bhalla house. Mani asks her to stay positive and leave the decision in Aaliya’s hand. She tells Mani that she wants Aaliya to have a good future. Mani suggests her to launch a new business venture and also ask Aaliya to join her, which can bring them together and also shape up Aaliya’s life. Shagun likes his suggestion a lot. She agrees to him. Roshni meets the Bhallas and gets surprised. Bhallas bless her baby. Ishita tries to secure Roshni. She tells them that Roshni and the baby are fine, there is nothing to worry. She fears that they want to take Roshni home.

Raman tells Ishita that they have come to take Roshni home for the baby shower ceremony. Ishita asks them to conduct the ceremony in her home. She asks them where were they till now, why didn’t they show concern for Roshni and the child, Roshni didn’t visit them since many months, why did she become important to them now. She understands that they are just willing to get the child. She tells him that Roshni was left alone till now, if they have come now to pretend care, then its easily understood that they are just wanting their heir. Mrs. Bhalla wants to fulfill her responsibilities towards Adi’s child.

Roshni tells them that they can’t snatch the baby from Roshi. She refuses to send Roshni. She tells them that she will never agree to them. Raman tells Ishita that the baby is Bhallas’ heir. Ishita knows Raman has no affection for Roshni. She doesn’t want them to separate baby from her and Roshni. Bhallas make a request to Ishita. Ishita thinks of Roshni’s rights. She has a doubt that they just want the child and not Roshni. Raman tells the family that he will get the heir in the family any way. Raman plans a flash mob to convince Roshni and Ishita.