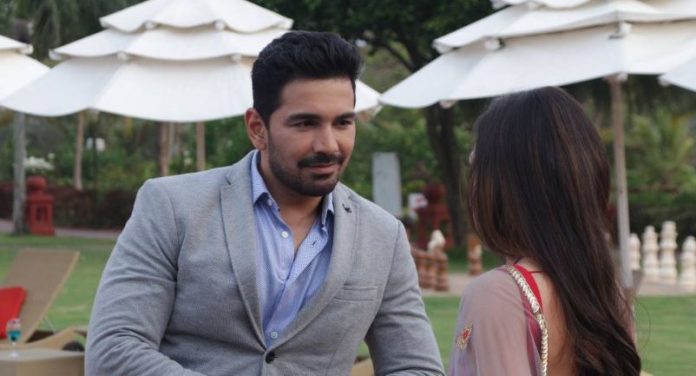 Rajdeep arrives at Kunal and Mauli’s house and asks them to send Nandini with him. Kunal stops Rajdeep at the door. He gets angry when Rajdeep speaks ill about Nandini and Mauli. He beats up Rajdeep. They have a fight. Kunal doesn’t want Rajdeep to create troubles for Nandini. The neighbors gather there to know what’s happening. Rajdeep tells the neighbors that they should help him and confront Kunal and Mauli, who have become a wall between him and his wife. Mauli tells Rajdeep that Nandini was found injured on the roads, where was he at that time, he is the one who made her lose her child, he has no right on Nandini now. She asks him to stop his drama and leave, Nandini was in bad state and now she needs extra care after the miscarriage. She refuses to send Nandini with him.

She tells him that this is Nandini’s decision as well. Rajdeep says you have hidden my wife here and daring to threaten me of police. He tries to take advantage of the crowd. He complains to the neighbors. He says Mauli should explain Nandini and send her back home, but she is filling Nandini’s ears further.

He asks Mauli if she has any enmity with him. He asks neighbors to help him out. He can’t tolerate Mauli’s dominance in his personal life. He says she had slapped me before and now she is intending to break my marriage, what does she want from me. Rajdeep tells Kunal that he wants to hear his wife’s reply. Kunal asks him to go ahead and ask Nandini. Rajdeep is angry on Nandini’s rejection. He tries to convince her to return home. Nandini asks Rajdeep to leave, she won’t come with him. Rajdeep gets a huge shock. Rajdeep insults Mauli. Kunal asks Rajdeep to leave if he wants to be fine. Kunal throws out Rajdeep from the vicinity. The neighbors support Kunal, but don’t want Rajdeep to create a scene like this every day.