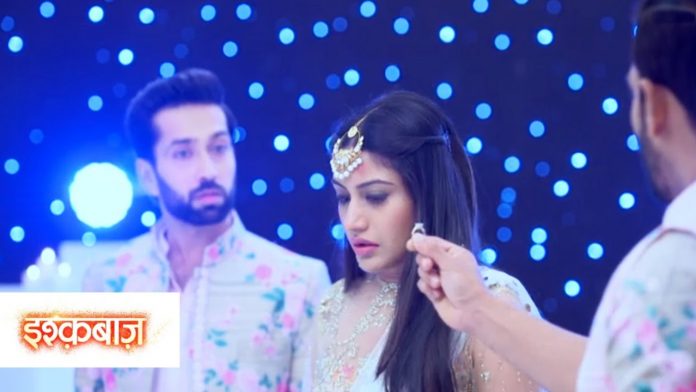 Anika gets scared of Daksh and recollects his threatening. She turns too restless and tries to talk out to Shivay. She barges into his room at night and tells him that Daksh is really bad, she worries for Priyanka and wants the marriage to break. He scolds her for falling so low and risking Priyanka’s happiness. She tells him that Daksh has an affair with Payal. She asks him to think if he will make Priyanka marry such a molester. She asks Shivay to consider her claim just once and think of Priyanka. She tries her best to convince him. He tells her that he will prove her wrong by giving her a chance to get evidence.

He tells her that he believes Daksh is right and wants to end the matter forever. He tells Anika that she will just get one chance to prove herself. She tells him that she has a plan by which she can prove Daksh wrong. He tells her that he is sure that her plan is flop, but he will accompany her. Anika and Shivay reach Payal’s house and spy on her.

Payal gets the holiday package for Lonavla and tells the delivery guy that she didn’t order anything such. She refuses to accept the tickets. The man tells her that maybe she has participated in the competition at some shopping mall. Payal then accepts the trip tickets and calls up Daksh to have a getaway with him. Shivay stops Anika from getting sighted by Payal. They come close while hiding. Anika tells him that she has lied so that she can save Priyanka’s life.

She asks Shivay not to regret and just think for his sister’s betterment. Shivay agrees to her. He meets Daksh and tells him to leave for the Lonavla resort so that he can finish the work. Daksh refuses to him and tells that he has planned his time with Priyanka. Shivay gets happy knowing Priyanka is most important for Daksh. He asks Daksh to go with Priyanka for shopping.

He sends Daksh and Priyanka for jewelry shopping. He stays assured that Daksh isn’t wrong. He asks Anika to just see Daksh, who really cares for Priyanka. He tells Anika that Daksh has left work for Priyanka. Priyanka returns home and tells Shivay that Daksh left to help his friend, who met with an accident. She feels his excuse is really genuine. Anika gets doubtful and asks Shivay to come with her to spy on Daksh. They have a sweet argument when they leave for Lonavla together. They make sure to tell each other that they are together just for Priyanka’s sake. Anika accompanies Shivay and reaches Lonavla. Daksh meets Payal at the resort and tells her that he has fooled Shivay and Priyanka well.

He likes challenges in life. He tells Payal that Shivay can’t catch him and even Anika can’t do anything. Shivay and Anika’s arguments continue on the way. Anika tells Shivay that they shall listen to radio than fighting. Love songs play and embarrass them. They land in funny situations. Shivay asks her to switch off the radio. Anika agrees with him. He throws off the radio when it doesn’t stop. She realizes that he breaks everything around. He asks her to stop murmuring and not listen to songs. She wonders how will they cross the journey this way. They reach the resort to know if Payal and Daksh have checked in. Shivay learns that Daksh didn’t come yet. Anika tells him that they will wait for Daksh till he comes. Shivay takes a single room and gets helpless to share it with Anika.

She refuses to stay with him. He tells her that they are here to spy, not for any other purpose. He asks Anika to come as its her plan. He doesn’t see Daksh romancing Payal. A close hit and miss saves Daksh. Anika and Shivay get busy in their arguments, while Daksh makes an easy leave. Tia calls up Shivay to know about him. He tells her about his urgent meeting. He holds Anika responsible for making him lie. She tells him that she values honesty a lot, but she is ready to lie for Priyanka’s life.

Anika spies on Daksh. She asks Shivay to have patience. Shivay asks her not to upset him with her taunts. Shivay attends Khanna’s call and goes out to catch network. Daksh sees Shivay at the resort. He changes his plan to meet Payal. Anika waits for Shivay to come and catch Daksh red-handed. Anika finds Daksh and Payal romancing. She wishes Shivay knows Daksh’s truth. Anika fails as Daksh plays safe and enjoys the chase. He asks Anika to reveal his truth by all the possible ways. Will Anika succeed in unmasking him? Keep reading.