Yeh Rishta Kya Kehlata Hai: Naira and Kartik wonder why they got stuck and hindered while signing the divorce papers. Naira meets Kartik and talks about their past. They try to know what went wrong between them. Anmol and Mansi’s matter makes them fight again. Naira points out that Shubham’s death has ended their relation, when she wasn’t at fault. She adds that Kartik is blindly following Suwarna’s opinion. Kartik lashes out anger on her when she names Shubham in the matter. Kartik tells her that he will sign the divorce papers the next day and not think about her ever. Naira too calls it the end of their relation. When they try to get away, they get stuck in a storm.

Piyaa Albela:
Angraj can do anything to get Pooja. He runs after Surbhi and thinks she is Pooja. Rahul stops Angraj and throws a glass of water on his face. Angraj asks them to give a makeup box so that he can turn Pooja beautiful again. He tells them that he can’t bear Pooja’s ugly looks. He asks Surbhi to make Pooja beautiful again. Pooja stops Surbhi. She wants to anger Angraj and defeat him. Pooja finds this only option to get rid of Angraj. Her plan gets working.

Jiji Maa:
Vidhaan gets the good news of his friend becoming a proud parent. He informs Niyati that his friend is blessed with a baby. Niyati cries and recalls her miscarriage. She couldn’t tell him that she lost her child because of Uttara. She can’t break Vidhaan’s heart. Vidhaan consoles her and gives her new hopes. Falguni shares her sorrow with Niyati. She tells how Suyash is expecting her to complete their family, which she can’t do. She tells Niyati that she can never give a child to Suyash. She wants to be honest in her marriage. She decides to tell truth to Suyash. She fails in her attempt. She finds a way to reveal the truth. She writes a letter for Suyash and walks out of the house with a sinking heart. Suyash comes home and asks Niyati about Falguni’s whereabouts. Uttara gets happy to finally get rid of Falguni.

Chaitu Lal gets jealous of Imli and Hari’s childhood friendship. He wants to find a girl for Hari, so that Hari can settle down and forget Imli. He realizes Hari was in love with Imli, which she isn’t aware of till now. Imli learns that Chaitu is meeting the prospective brides. She gets mistaken that Chaitu is cheating her and wishing to remarry. She sheds tears thinking about her future, which would get ruined after Chaitu’s second marriage. Hari assures Imli that he will take care of her and entire family. Chaitu then clears the misunderstanding and asks Hari to get married.

Shakti:
Nani plans to keep a puja for Soumya so that Soumya and Harman can complete their family by having a child. Nani wants Singh family to have a heir. Soumya hides her kinner identity and doesn’t want to do a sin by sitting in the puja. She doesn’t want to play with Nani’s devotional beliefs. Harman and Soumya find a way to avoid the puja. Nani gets suspicious that they are hiding something. 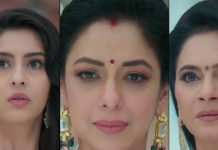