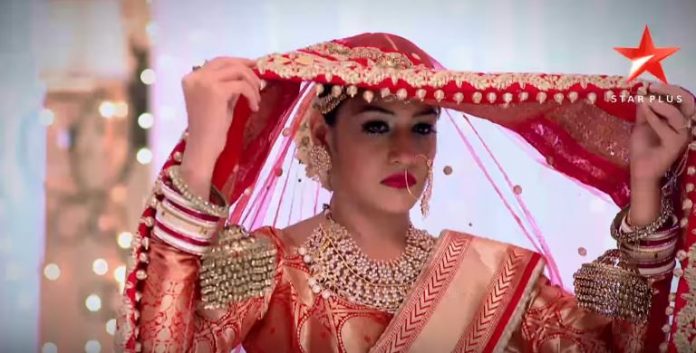 Shivay reaches the chawl where Anika’s marriage is happening with Nikhil. He claims that Anika loves him and has an affair with him. Nikhil believes Shivay. He refuses to marry Anika. Anika pleads to Nikhil and asks him not to believe Shivay. Anika gets blamed by everyone. Anika’s aunt insults her. Gauri supports Anika, knowing she can’t be wrong. Shivay defames Anika in front of everyone. Shivay makes sure that Anika’s marriage breaks, as she has broken Priyanka’s marriage. Anika cries and asks Nikhil not to leave from the mandap, Shivay is lying because of his grudge. Shivay presents some videos and evidences against Anika, to prove that Anika had a relation with him. Nikhil feels shattered. He doesn’t understand how to believe Anika after seeing the videos.

Nikhil throws away the Jaimala and breaks ties with Anika. He tells her that their marriage won’t take place now. She tells them that she wasn’t with Shivay, she has no terms with him. Shivay forcibly drags Anika from the mandap. She takes her to the temple and marries her. Anika goes missing. Shivay later informs Gauri about Anika.

Gauri learns about the shocking Shivika marriage. Anika gets many staining tags on herself, but Gauri saves her elder sister. Aunt humiliates Anika. She kicks out Anika from the house. She compares Anika with her mum, who also had a bad past. The neighbors too try to beat up Anika and punish her for her characterless act. Anika gets fortunate to get support from in-laws. Omkara and Rudra learn about the marriage and support Anika, by going against their brother Shivay. They take a stand and protect Anika from mad neighbors. They take Anika home, and encourage her to counter Shivay’s hatred. They are sure that Shivay and Anika’s marriage had to happen as destined, since all their pre-wedding rituals also got completed unknowingly by twist of fate. They wish Shivay also accepts Anika as his wife. They don’t want Shivay to ruin an innocent girl’s life. Will Shivay realize their eternal love bond? Keep reading.