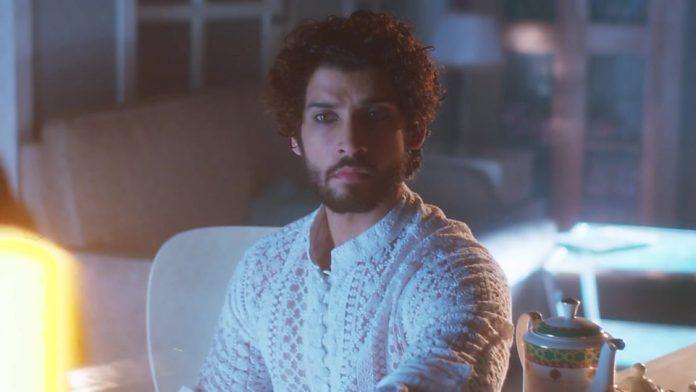 Kabeer gets injured during the fight with Miraj. Zara hugs him and cries for his wounds. She does the aid to his wounds with much love and care. Kabeer then gets taunting Zara and asks her why didn’t she tell him about Miraj’s evil intentions. He says you always tell me about everything, but you never said about Miraj’s troubling behavior, today he was trying to snatch you from me by giving you a price. He gets angered and blames her for encouraging Miraj. He tells her that her silence has given wrong signs to Miraj, it was her duty to inform her husband about such a cheap-minded person troubling her. He taunts her and asks if she was liking Miraj.

Zara asks him to stop doubting him. She scolds him and tells him that she would have slapped him if he was not her husband. She cries by his doubts. She asks him to think why she didn’t tell him anything.

She says Miraj was an angel for you, you should have seen my pain in eyes, Miraj was investing in your project, he befriended you and blinded your eyes by his fake concern, you didn’t see my pain ever, you believed Miraj more than me, Miraj was fulfilling your dreams, he was everything for you and the other side, I was your wife, whom you divorced. She tells him that she kept numb as Miraj was threatening her and Zeenat about Amaan’s life. She reveals the entire tortures done by Miraj. Kabeer regrets to hurt her heart. He apologizes for speaking bad things in anger.

Kabeer plans Zara’s birthday. They both perform dance in the party. Zara gets best wishes from everyone. Kabeer fulfills Zara’s wish by throwing a grand party. He wants the party to bring happiness for them, but Miraj adds the drama by expressing his views over Zara.

Kabeer exposes Miraj’s truth in front of the family. His family gets a big shock on knowing Miraj’s truth. Kabeer is upset as he believed Miraj so much, and even then Miraj didn’t care for them and badly eyed Zara.

He feels Miraj fooled all of them by pretending good. He asks Nilofer who is she, how is she related to Miraj. Nilofer also get trapped. He is angered by Zara’s taunts, but wants to believe her perception now. He tells Zara that he wanted to help the community by his project and took Miraj’s help, he couldn’t imagine that Miraj will break his trust this way, he wasn’t blindly trusting Miraj, he was into the illusion because of Miraj’s good drama. He learns a lesson in life. He tells Zara that he won’t get affected by Miraj’s cheat, he still believes in relations and friendship.