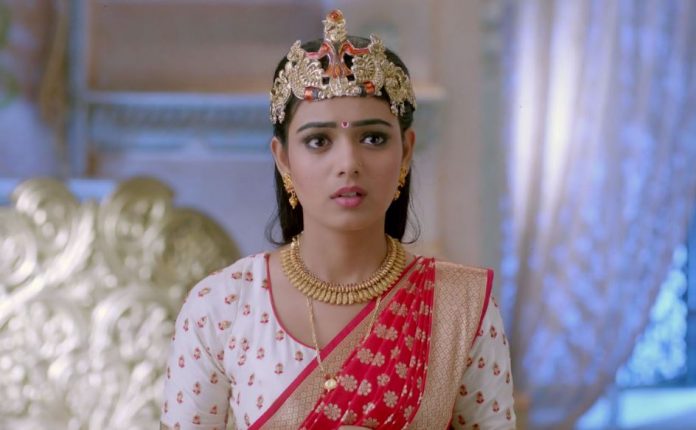 Angad compels Pranali to remove the Agnishakti boundary. Pranali removes the fire ring, which makes Angad free to reach to Marekeyasur and get his first weapon. Angad asks Marekeyasur to pass his first weapon, through which he will ruin Maling. Angad makes Pranali away so that she doesn’t witness the weapon. Pranali gets to see the weapon flashing. Pranali recalls Chegu and Eshwarya’s conversation. She worries that Marekeyasur will kill as she has seen the demonic weapon. Angad gets his hands on the weapon. He finds Pranali unconscious and gets her back to the palace.

Angad gets too happy. He gets romantic. Pranali stops him and tells him that she is aware of the truth that Marekeyasur will kill her as she has seen the demonic weapon. She refuses to take their relation ahead, knowing he is Marekeyasur’s son. Angad denies this. She tells him that Chegu has confirmed this. Angad goes to ask Madhumali about Pranali’s approaching death. Madhumali tells Angad that Pranali is right. Pranali attacks Angad with Agnishakti and disappears. She then forgets whatever happened and the attack she made on Angad.