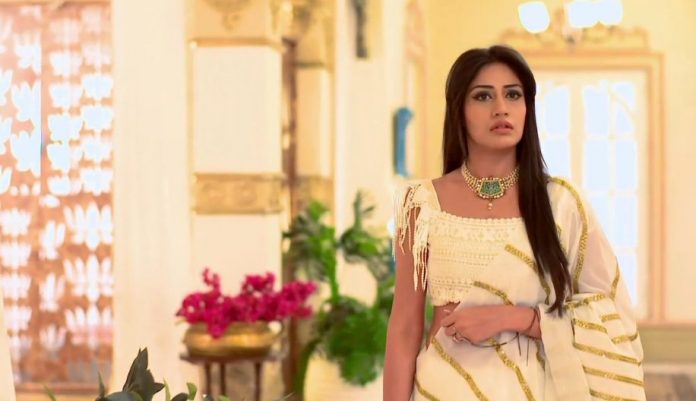 After Anika’s big humiliation chapter, Omkara and Rudra get Anika to the Oberoi mansion. Shivay gets tempered on seeing Anika home. He asks Anika how did she come here. Omkara tells him that they got Anika here, as Anika is the bahu of the family. Dadi asks Shivay if this is true. Omkara tells Dadi that this is true, as Shivay has married Anika in the temple last night. Shivay asks them what’s the proof that he got married to Anika. He asks Anika if she can produce some evidence for their marriage. He denies to accept Anika. He asks Dadi not to come in Anika’s words, such mangalsutras come cheap in the market. Dadi scolds him for thinking low. She asks him to say if he has really married Anika. Shivay tells him that Anika’s tears can’t melt him, the matter is over and now he won’t have any relation with her.

Dadi explains him the importance of mangalsutra. He tells her that he doesn’t want to spoil his language, but Anika doesn’t understand any better language. He asks Anika to get lost, thinking she wants his property. He tells Dadi that Anika is interested in his money, she has evil intentions, but he won’t let her succeed. He doesn’t want Anika to reap benefits from their marriage. He stays worried for Priyanka. His pain doesn’t get less. He doesn’t lose hope and feels Priyanka will be revived.

Anika has a big task to keep her one sided marriage and bear Shivay’s anger. Omkara and Rudra tell Dadi that they are well aware of the fact that Shivay married Anika, and they will give her the status of their sister-in-law. They request Shivay not to deny the marriage and ruin Anika’s life. Shivay sticks to his stubbornness and wants to prove Anika a liar. Anika has become Oberois bahu now. She doesn’t want to leave her rights because of Shivay’s madness. Dadi also finds Shivay’s behavior unjustified when he accepts his mistake in anger indirectly. He is mistaken that Anika has trapped him for money and now she is chasing him for the sake of comforts and luxuries she would get in his mansion.

Anika gets to see Shivay’s sorrow over Priyanka’s worse condition. She overhears Shivay’s emotional talk with Priyanka. He tells her that he kept the decorations and lights intact, so that she gets fine and marries Daksh. He doesn’t take doctor’s verdict seriously. He knows that she will get fine soon. He asks her not to trouble him and recover. He tells her that he will never find easy to live without her, she has to return to them. Anika cries seeing them. She gets forgiving Shivay for whatever wrong he did with her. She understands Shivay’s pain and his dilemma. She will bring Shivay on right path by exposing Daksh’s truth. She will prove her innocence by the help of Omkara and Rudra.