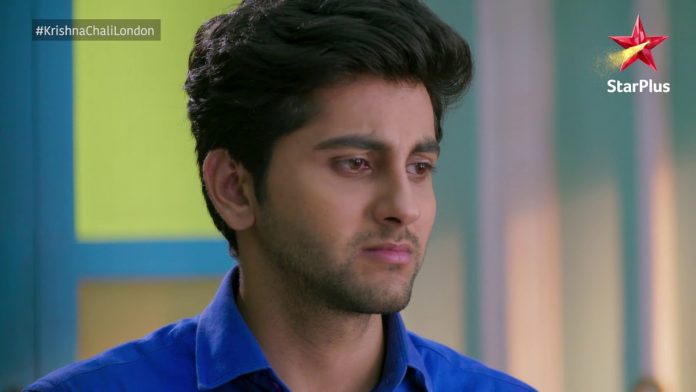 Radhe and Krishna learn about Shukla’s atrocious move, that he is behind Dubey’s arrest and sufferings. Krishna overhears Shukla’s talk with the minister. Shukla sees Krishna and doesn’t feel ashamed. He gives her sweets for his success. He tells Krishna that he has done this to teach her a lesson. She asks him why did he punish her dad like this. He tells her that everything is going fine for him, he doesn’t want anyone to teach him, maybe she is overeducated, but he has life’s experience. He scolds Krishna for hurting his ego by going against his commands. Radhe meets Dubey in the jail and tells him that he will arrange the bail money. Krishna tells Radhe that Shukla has sent Dubey behind the bars only to take revenge from her. Radhe can’t believe it at first.

Bua scolds Radhe for pretending care and respect for Dubey. She blames Radhe for doing this drama, when he also knew about his dad’s misdeed. Radhe tells them that he had no idea about his dad’s doing. Bua tells Dubey that Krishna has been tolerating a lot in Shukla house, and when she opposed Shukla to save Lali, Shukla has done this for avenging Gajanan’s arrest. Bua tells Dubey that they did much wrong to marry Krishna in the mad family. Dubey cries for his mistake, knowing Shukla’s misdeeds.

Radhe tells Krishna that he will take answers from his dad. He assures Krishna that he will help her. Krishna feels helpless when she fails to get the bail amount. All the neighbors and villagers contribute money to bail out Dubey. Everyone shows their belief in Dubey. They respect Dubey since he is a kind-hearted man.

Krishna feels Shukla can never understand Dubey’s hard earned respect. Radhe reaches home to confront Shukla for his inhumanity. He takes a stand for Krishna and her family. Shukla and Radhe have a heated argument. Radhe scolds him for planning such a cheap thing. Shukla tells Radhe that he doesn’t want anyone to give importance to Krishna. He gets slapping Radhe to punish him for opening his mouth in front of his dad. Radhe fights back and stops Shukla from the torture. He doesn’t want Shukla to do any injustice with Dubey. Shukla accepts his plannings. He tells Radhe that he will not tolerate anything. He asks Radhe to arrange money and get the bail for Dubey. He challenges Radhe to help Krishna. Radhe takes up the challenge and rushes to arrange money.