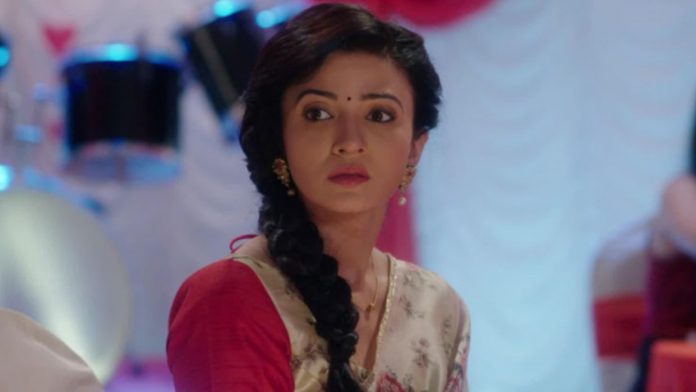 Vedika’s death twist next in Aapke Aa Jane Se…
Vedika and Sahil get caught by the terrorists, who keep a condition that Vedika dances non-stop if she wants to save Sahil. Vedika dances for Sahil’s sake and sheds tears. She steps on the glass pieces and gets her feet bleeding. Vedika dances on the tunes of the terrorists. Deepak takes disguise of a terrorist, so that no one doubts on him. He plays a trick and throws chilli powder over them. He tries to help Vedika. Sahil reaches there and rushes Vedika away from the terrorists. Deepak gets shot by them. The terrorists scare Sahil that they have fixed the bomb near the children. They laugh and ask Sahil to save the children if he can.

Vedika and Sahil save the children. Vedika gets injured. Sahil rushes her to the hospital. Doctor breaks the shocking news that Vedika is no more. Vedika has lost her life, while saving the children from terrorists. Sahil can’t believe this.

He falls in trauma. Doctor apologizes to Sahil and Vedika’s family. Manjula and Arya shed tears for Vedika. Badi Amma and Puneesh get happy with this news. They have plotted against Vedika. They remove the real doctor from the hospital and send the fake doctor to inject Vedika and kill her.

Sahil catches the fake doctor and asks him how did Vedika die. The doctor gets beaten up and admits that someone has paid him to kill Vedika. Sahil doesn’t want to spare the doctor. He asks who has paid him for this task. The doctor worriedly sees Badi Amma Puneesh goes and switches off the lights, so that the doctor can escape in time. Badi Amma makes the doctor run away before he could take her name. Sahil sheds tears for his love Vedika. Bhoomi consoles Sahil. Vedika won’t be dying. Vedika will be returning to Sahil and expose Badi Amma’s crimes.