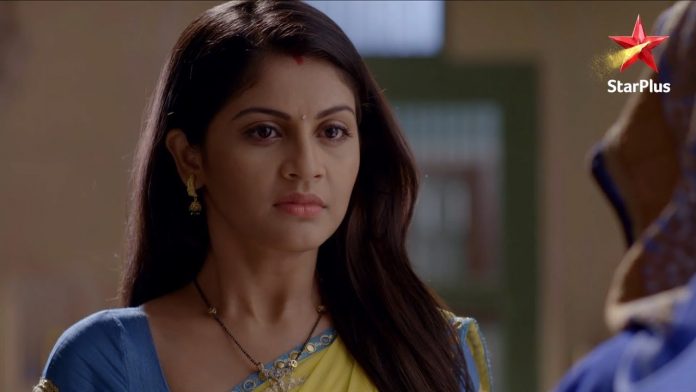 Krishna takes Saajan’s help and makes a plan so that Radhe realizes his mistake. Radhe gets doubting Krishna and hurts her by his bitter words. He tells her that he will kill Prashant. Krishna gets crying and wishes that he changes his thinking soon. Radhe finds Saajan with Krishna and receives a big shock. He gets puzzled for some time and asks Saajan what’s happening. Saajan stops him from his madness. Saajan slaps him and asks him to limit his ill thinking about Krishna. Shukla wants the women to oppose Krishna. He gets unhappy seeing his wife praising Krishna. He changes the settings of treadmill so that his wife falls down and blames Krishna for it. His wife really falls down and feels Krishna has got a trouble for her. Dubey visits them to meet Krishna. He still thinks Krishna isn’t accepted by them. Shukla’s wife tells him that Krishna isn’t at home. Dubey goes out to wait for her.

Radhe tells Saajan that Krishna is having an affair. Saajan explains him that Prashant isn’t with Krishna. She tells Radhe that his doubt can’t be removed by her explanations. She reveals Saajan and her plan to open Radhe’s eyes. She weeps that Radhe has doubted on her character. She tells Radhe that he is blindly suspecting her, his love has ended as he has no trust on her now. She scolds him for being so foolish that he is hurting his wife this way. She takes Radhe’s class. She gets upset with him and makes a leave. Radhe doesn’t want Krishna to leave from his life. Radhe tries to stop her. Krishna tells him that she can see his love ending for her, and this is the reason she has fallen in his eyes. Radhe feels ashamed of his suspicion. Dubey meets Krishna and reminds her about her exam results.

He asks her to pursue her dreams. He wants Krishna to help herself like before. He wishes Krishna becomes a doctor. Krishna tells him that her dreams still matter to her. She recollects her past life and turns upset. She doesn’t feel like talking to Radhe. She thinks she has lost a good friend in Radhe. She shares her problems with Lali. She tells Lali that she has big dreams and expectations from life, but everything fell apart because of her marriage. She cries on her future. Lali asks Krishna if she will walk out of Radhe’s life if she passes the exams. Krishna admits that Radhe isn’t worthy of her support now, Radhe has fallen much and doesn’t care for her now. She doesn’t want to stay back in Shukla house and sacrifice her dreams. She tells Lali that she wants to leave Radhe forever. Radhe meets Saajan and seeks his help to stop Krishna. Saajan forcibly feeds alcohol to Radhe. Lali asks Krishna to give some time to Radhe and keep the marriage. Radhe doesn’t want Krishna to leave for London.