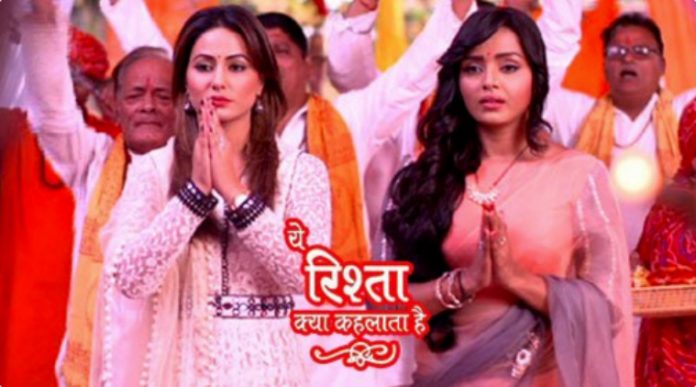 YRKKH: Suwarna to take up Akshara’s avatar… Kartik prepares for his marriage with Ashi. Naira has to leave for Singapore for her surgery the same day when Kartik’s marriage is due. She doesn’t want Kartik to know about her illness and invite sorrow in his life. She is happy that he is marrying Ashi. Kartik makes Naira jealous by showing his engagement ring to her. He dances with Naira and asks her to celebrate his joy. She asks him to stop his madness. She reminds him his limits, as she isn’t his wife now. They have a heated argument in front of Singhanias. Kartik invites Naira for the wedding. He tells her that he has come to take Naira along. Naira tells him that she will surely come in his marriage. He is angering Naira so that she speaks up the reason for cheating him. She doesn’t want to answer him. He instigates her angrily. She tells Kartik that she will come and give her best wishes to Ashi.

He is sure that Naira can’t see his marriage with someone else. He plans to create an emotional drama in the mandap when Naira attends his marriage. Kartik just wants to marry Naira. He feels he has a right to know anything related to her life, since she is also his life. He wants to know why Naira separated herself from him suddenly, when they always counted themselves as one soul. He makes Naira realize that he isn’t family for her, but her soul mate. He wishes Naira understands his feelings hidden behind the anger. Kartik pretends happiness to anger Naira, so that he can make Naira admit her love.

Singhanias realize Kartik’s pain and don’t stop him. They want Kartik to get rid of his pain and anger. Kartik will know Naira’s agony. Naira breaks down and cries on her fate. Naitik hugs Naira and asks her to be strong, since attending Kartik’s marriage won’t be easy for her.

Singhanias keep their silence and support Naira. Naira’s illness and pain awakens the mother in Suwarna. Suwarna feels responsible for separating Kartik and Naira. She finds both of them sinking in tears. Suwarna recollects her promise given to Akshara, that she will always protect and support Naira. Her hate blindness gets off when she sees Naira’s sorrow. Suwarna will be soon turning sensitive towards Naira, and get back in Akshara’s avatar for Naira. Suwarna will become Naira’s mother once again and help her get out of the big mess. Suwarna secretly plans to unite Kartik and Naira. Suwarna reveals the big reason to Kartik. Kartik runs away from the mandap and reaches Naira to share her pain. KaiRa’s emotional union will be seen again. Suwarna will be on Naira’s side as a mother and give her courage to fight with her illness.