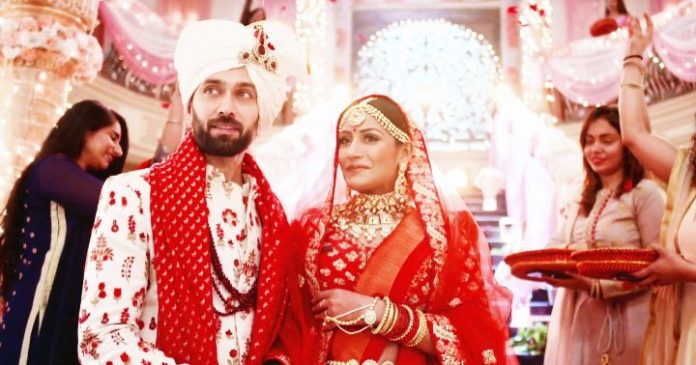 Ishqbaaz Sahil gets caught up by the police. He doesn’t get any sense and boasts of his contacts with Shivay. Inspector calls up Shivay and Anika to inform about Sahil’s crime of drunken driving. Sahil tells Shivay that the police can’t dare to arrest him. He tells him that he has taken his car to go out with friends. Anika slaps Sahil in anger and asks him how dare he take Shivay’s car without permission. Sahil doesn’t want Anika to interfere in his matters. Shivay scolds him for going out of limits every time. He doesn’t help Sahil. Anika asks Sahil to have some shame and change himself.

Sahil apologizes to him, while faking sorrow. Anika asks Shivay to let Sahil stay in the lockup for a night so that he gets a mind. Shivay decides not to help Sahil. He feels Sahil has changed a lot by being in wrong influence in his boarding school. He regrets to punish Sahil. Anika tells him that they should not get Sahil home so soon.

Shivay asks inspector to look after Sahil, since he is still too young. Anika finds Shivay too sweet to handle. Meanwhile, Dadi and Suryakant have a meet in the garden. Omkara and Rudra also reach out there being worried for Dadi. They realize that even Shivay is present there. They ask Shivay about coming up when he asked them not to come. Shivay tells them that he equally worries for Dadi. They find Suryakant romancing Dadi. Dadi tells him that she can’t accept the chance in her life, since its not their age. Shivay and his brother get under the sprinkler to overhear Dadi and Suryakant’s conversation.

Dadi wants to make a sacrifice of her love. She tells him that she has just loved her husband, and she can’t love him. She doesn’t want to go against her teachings, since love happens just once in life. Obros feel proud of Dadi. They give her a happy hug. Suryakant respects Dadi’s decision. Suryakant bids adieu to the Oberois. He helps Shivay about Prithvi, so that the data can be used for the autobiography. Suryakant has got much time from Oberois. He tells them that he will meet them again.

Oberois miss Suryakant’s jolly behavior. Jai tells Shivay that he left early for a meeting. He congratulates Shivay for the big contract. Shivay tells him that they are one family now. Shivay and family senses the tension between Jai and Priyanka. Shivay wants to ensure Priyanka’s happiness. Moreover, Sahil gets angered with the insult got from Shivay and Anika. He doesn’t want to forgive Shivay. He gets revengeful against Shivay. He goes home and apologizes to Shivay and Anika, just to win their trust to back stab later. Shivay gifts Anika and surprises her. She gets her charm bracelet. She gets emotional with his surprise.

Shivay tells her that they will always be together and find happiness in any tough situation. He confesses love to Anika. She tells him that she loves him more. He tells her that its a challenge that he will prove his immense love for her one day. Rudra asks Shivay to come for the important meeting. Shivay falls in grave danger.