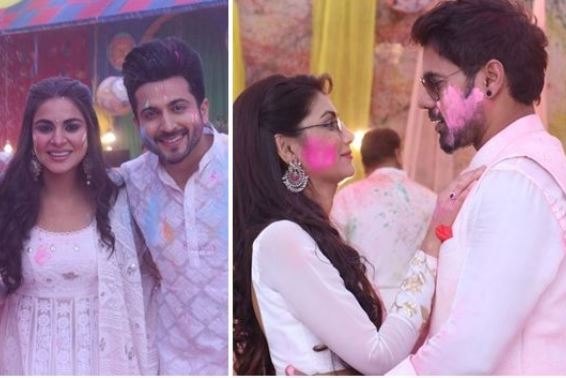 High Points in Kumkum Bhagya-Kundali Bhagya in the upcoming dramas on Zee TV: Pragya hears Kiara and Abhi talking to each other via video call. She gets emotional hearing their conversation. Tanu comes to Pragya’s house and asks her where is Abhi? Pragya says he is not here. Tanu says last time you had said the same, but he was in your bedroom. She accuses Pragya to call him to her house often and asks what do you do alone with him. Pragya asks why shall I tell you what I do? Tanu blames her and tells that she is doing this to take revenge from her. She goes to Pragya’s bedroom and pulls the blanket shouting this is too much Abhi. She sees Kiara on the bed. She warns Pragya and leaves from there. Abhi plans to steal the admission form from the school principal’s office in the night with Purab’s help.

Kundali Bhagya: Prithvi hires a goon to kill Rithvik. Rithvik realizes his life is in danger when the goon attack hit his car with his truck. He thinks why does he want to kill me. The goon hits him again and the car blast, leaving him injured. Prithvi asks the goon to confirm if Rithvik died or not.

The goon tells that he couldn’t get the body as the accident happened on the road. Shristi tries to make Preeta realize her love for Karan. Rishabh is waiting for Rithvik to come there and inform him about all the truth. Preeta and Shristi also reach there. They wait for Rithvik. Later, they come to know about Rithvik’s dangerous accident and realize someone wants to kill him.

Tujhse Hai Raabta: Sampada worries for her baby. Atharv asks her to forget baby else they will get caught by Malhar. The bomb squad tries to diffuse the bomb which is in the baby carrier worn by Kalyani. Malhar asks Kalyani not to panic. Anupriya gets worried for Kalyani and prays for her safety. Kalyani sees the bomb timer near the blast time and runs out pushing the squad, to save everyone’s lives. Malhar shouts her name and follows her in his jeep. He asks her to stop. Kalyani asks him to go and tells that she can’t let him harmed by the bomb. She says I can’t risk your life and asks him to go. Malhar manages to save her before the bomb would explode. He realizes Kalyani’s genuineness and thinks if he regarded her wrong and turns softer for her. Later, he sees Sampada and Atharv’s picture in disguise while seeing baby pictures in Kalyani’s mobile.