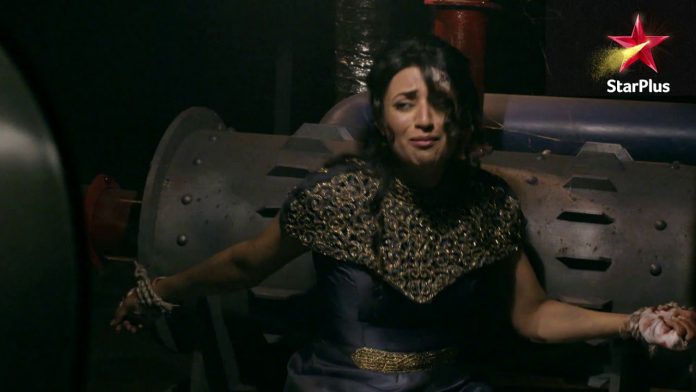 Yeh Hai Mohabbatein Ishita in trouble. Raman tells the family that Simmi is giving the news to Parmeet. He gets into a heated argument and gets blaming Simmi. He tells them that Parmeet has reached before him when he went t rescue Ishita. Simmi tells them that she has changed, and she has left Parmeet now. She doesn’t want to be part of Parmeet’s crimes. Raman tells them that Ishita would have been with him if Parmeet didn’t return in their lives. Simmi strikes on his ego and tells him that he is responsible for Ishita’s state. Raman slaps her in a fit of rage. Ishita turns vulnerable and wants help some how. She wants some answer from the goons. She asks them to help her and make her talk to Raman. Goons get speechless, since they are constantly watched by Parmeet. Simmi tells them that she has always being a well wisher for the family, ever since she has ended ties with Parmeet. She wants them to believe her.

She gets upset that Raman is treating her like a stranger. Raman tells Simmi that she should leave from the house. Simmi agrees to leave the Bhalla family. Rohan feels bad for Simmi. Simmi doesn’t want to stay back after the insult. Raman doesn’t want anyone to support Simmi. He asks them to leave along with Simmi. Rohan consoles Simmi and tells her that she won’t be leaving the house. He asks her to understand Raman’s stress over Ishita’s kidnapping. She tells him that she can’t stay by losing the self respect.

She asks him to take care of her family when she leaves. Raman tells inspector that they have to arrest Parmeet and catch him red-handed. Ishita struggles to get help. Sudha watches Ishita on camera feeds. She learns that Simmi has come to meet Parmeet. Simmi tells Sudha that its very important for her to meet him. Simmi meets Parmeet and tells him how Raman is blaming her for Ishita’s kidnapping. She tells him that she has given her life to her family, and even then she is doubted by Raman. He shares her pain. He tells her that Raman will never trust her completely.

She tells him that she has left Bhalla house and doesn’t know where she will go now. He tells her that she can stay with him as long as he is out of jail. Sudha also allows Simmi to stay with Parmeet in the hospital ward, but asks her to get legal permission. Parmeet and Sudha come in Simmi’s words and believe Simmi and Raman’s fight. Parmeet tells Sudha that Simmi can’t go against him, he knows dealing with her. Sudha doesn’t trust her much and tells Parmeet that they should think of something. Simmi tells Parmeet that she has lost Ananya and even then she had forgiven Ishita.

She apologizes to Parmeet for going against him and favoring her family. They have a moment. Simmi doesn’t get permission to stay with him. Simmi tells police that Parmeet is innocent, and it was her mistake to complain against him. Sudha confirms with Karan that Raman and Simmi have really fought badly and now they are not on good terms. They rejoice with the news. Parmeet asks his goons to kill Ishita. She faces her death once again when the goons break out dangerous gas inside the room.