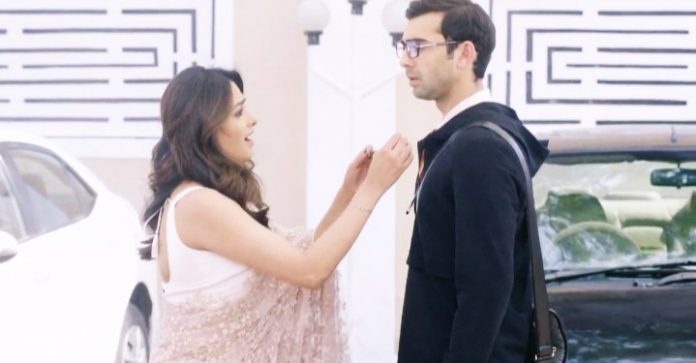 Yeh Hai Mohabbatein Shagun misses Adi and wants to meet Yug. Raman is happy that Sudha has lost to them. He tells Ishita that they can’t rely on Rohan. Yug calls Ishita to ask for her help regarding a job for Ranbir. Raman talks to Yug and tells him that he will give Ranbir a job in his company. He wants to meet Yug and asks him to get Ranbir at his office. Ishita doesn’t want Yug to meet Raman. She doesn’t want personally to get involved in HR work. She tells Raman that Ranbir should apply to HR and then get the job if he is deserving. Raman gets puzzled. Ishita doesn’t want Raman to meet Yug and get trapped in Adi’s memories. Sudha is frustrated as Rohan has insulted her and denied to come home. She learns about the minister visiting Bhallas industries for the celebration of Republic day. She doesn’t care for Bhallas company, since she is losing Rohan.

She then devises a plan against Bhallas. She wants Rohan to come back at her at any cost. She thinks of surprising Raman, and then making his life hell. Karan asks Sudha what is she upto. She doesn’t reveal her plan. She confirms the minister’s visit at the hospital. She tells Karan that she is going to do something through which Rohan will get helpless to return to her. Karan gets curious to know the plan.

Meanwhile, Ishita tells Shagun that she doesn’t want Raman to meet Yug. Shagun asks her to let Raman meet Yug and then accept the truth. Ishita asks Shagun to help Ranbir. Shagun agrees to help Ranbir just for the sake of Yug. Rohan is happy helping the Iyers and trying to win Aaliya’s heart.

He impresses Aaliya by his sensible and humble side. Rohan appears kind to her. She finds Rohan really changing. She is happy and surprised that Rohan is giving such good ideas to Iyers. She wants her family to stay happy. Rohan wishes Aaliya to forgive him once. Aaliya has no idea about Yug, since Ishita is protecting her. Shagun contacts Yug about Ranbir’s job. Yug tells her that he will meet her. She invites him for dinner. Yug doesn’t understand why is Shagun not inviting Ranbir, who has to discuss the job. Ranbir asks Yug why did Shagun invite him. Yug also finds it weird. Ishita is happy with Rohan’s reformation. She wants to support Rohan in his good work. Rohan gets Aaliya’s favorite anklet and thinks of keeping it. Bala sees Rohan keeping the anklet and asks him to return it to Aaliya. Sudha makes a plan to frame Raman.