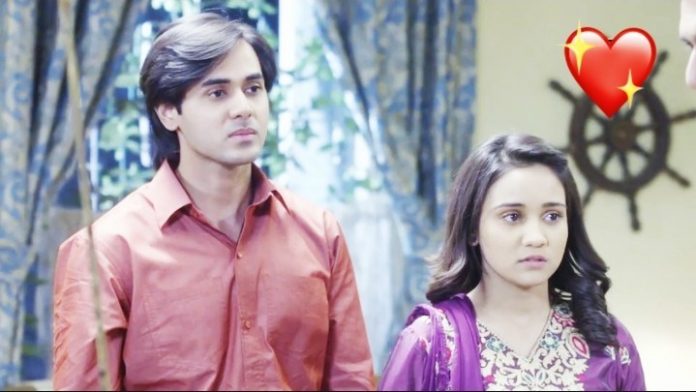 Yeh Un Dinon Romantic dreamy twist. Anand and Bela prepare for Naina’s marriage and Bidaai. Bela makes a list of things to send with Naina. She gives the list to Anand. She asks Anand not to make anything less. They are worried that Rakesh isn’t giving a good response towards the marriage. Sameer finds Naina upset when he meets her on the romantic date. He tells her that he has made the date plan to cheer her. He doesn’t like seeing her upset. He knows she is stressed about Rakesh. He tells her that all he wants to see is her smile. She tells him that she isn’t happy. He promises her that he will never lie to her or hide anything.

She asks him where is he taking her on honeymoon after marriage. She tells him that he can’t lie to her now, since he has to keep his promise. He tells her that he can tell her the honeymoon destination if she gives him a kiss. She gets angry on him and asks him not to get mad, there are many people around watching them. He tells her that they will be getting married soon, he wants to take her away to a place where they can find some isolation from the world. He convinces her to accompany him on the surprise date.

Main Maayke Chale Jaungi New entry: Jaya forgets Samar’s birthday. She compensates for this and arranges a surprise date for him. She celebrates his birthday. They spend some good time together. Samar cuts the cake and compliments her for the arrangements. Jaya feeds him the cake. Jaya shares a romantic moment with him. She recalls Satya’s memories and breaks the momnt. Jaya doesn’t know what is Satya planning. Satya has a new plan and wants to get Jaya remarried. She wants Samar out of Jaya’s life. She invites a guy to fix the alliance. Samar learns about Satya’s plans. He seeks help from Nani. Nani assures him that everything will be fine.

She tells Samar that Satya has found a guy for Jaya. Samar wants to know who is the guy. He wants to break the newly forming alliance. A new storm will be coming in Samar and Jaya’s lives. Samar learns Rama has come in the house in maid’s disguise. He hugs Rama and gets emotional seeing her efforts. He doesn’t want his mum to work as maid. Rama asks him not to think for her, and just focus on winning Jaya’s trust and love. Samar is sure that he will win since his love is true. Rama feeds him curd and asks him to make a fresh start. Jaya doesn’t want to forgive Samar so easily.