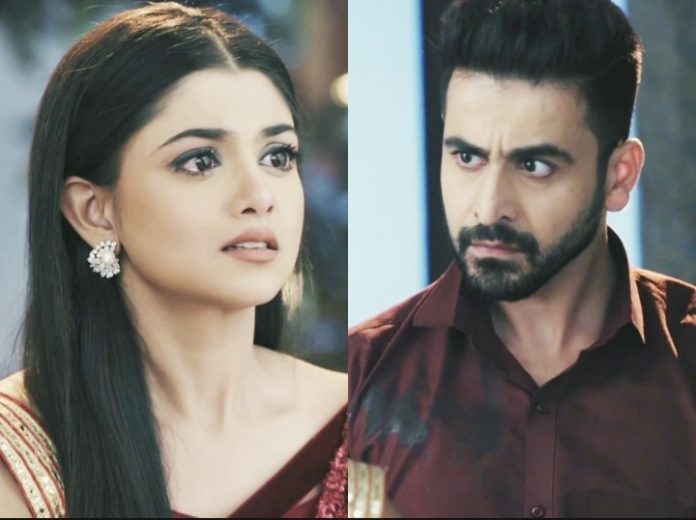 Jiji Maa Laddoo wants to get his parents together. Falguni and Suyash have a heated argument because of Uttara’s return. Their business is also getting affected. Suyash doesn’t want to listen to her during the labor union meet. He blames her for using the workers land for illegal business. He asks her how low will she fall. She asks him to stop his nonsense and apologize to the workers, if he wants everything to get fine. She doesn’t want to leave him. She wants justice for workers. She tells him that she will stay outside the house with the workers until he accepts the demands. He refuses to accept any demand. He asks her to go ahead with protest, he will get the police to throw them out. Falguni clashes with him, being the head of labor union.

She asks him to call the police, even she will complaint about him. Falguni finds a way to blackmail Suyash and teases him. She wants him to help the workers and pay them loans. He gets helpless to listen to him. Falguni learns that Laddoo has informed someone about Suyash. She goes to meet Laddoo. She sees Laddoo hurt. She cares for Laddoo and does the aid. She gets Laddoo home with her. She doesn’t ask him anything about his parents. Laddoo helps Falguni and gives her ideas to convince Suyash.

Laddoo gets a plan to unite Suyash and Falguni. He lies to them about his birthday. He tells Vidhaan that he has an idea to bring Suyash and Falguni under one roof. Vidhaan agrees to throw a party for Laddoo’s birthday. Suyash wishes Laddoo and hugs him. He asks Suyash to give him a gift. Suyash agrees to give anything he wants. Laddoo seeks his permission to call his friend in the party. Suyash lets him fulfill his wish. Suyash gets a shock seeing Falguni. He asks her how did she come. Laddoo tells him that he has invited Falguni. Laddoo reminds Suyash that he has taken his permission before, Falguni is his friend. Suyash tells him that he didn’t know Falguni is the friend Laddoo is talking about. He gets helpless, but celebrates Laddoo’s birthday with her. It gets awkward for them when Laddoo plays games with them to bring them close.