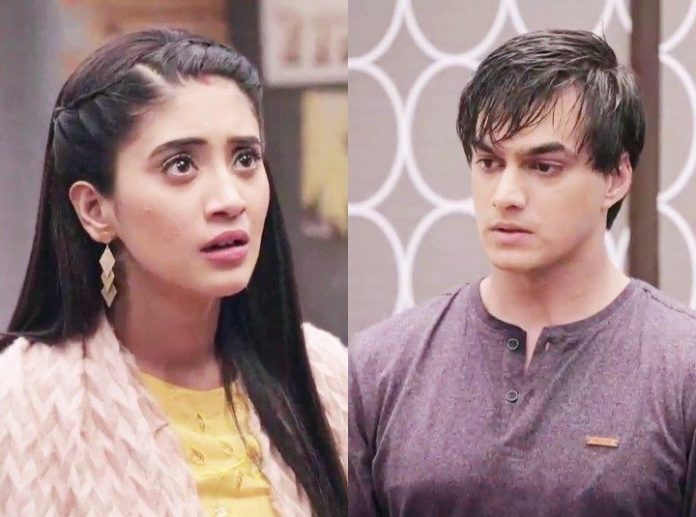 Yeh Rishta Another shocker. Kartik and Naira wake up from sleep, and receive a big shock. Their baby goes missing. Kartik looks for the baby in the room. He tells her that baby can’t go out on own. Naira asks him where did the baby go, who has kidnapped him. She gets worried and tells him that someone has snatched their baby. The entire family gets troubled and try to find the baby. The nurse is aware that the baby belongs to Kirti. Kartik and Naira beg to the nurse to get the baby, and then scold her for stealing the baby.

Kartik tells Naira that he is wrong to trust people easily. He feels guilty that he has believed the nurse and swapped the kids. Naira calls the nurse greedy, since she has seen the nurse staring at the locker. Kartik doesn’t want the nurse to reveal the secret to the family. Kartik tells the family that just the nurse is an outsider and she is at fault. They take the help of security and try to find the baby. They check the CCTV footage and realize the baby is inside the house.

Naksh comes home and learns the matter of Naira’s baby gone missing. He helps his sister in finding the baby. Naksh finds the baby in Lav and Kush’s room. He finds the kids playing with baby. Naksh reveals this to the family. Naira finally gets her baby back. She has created a havoc to get her baby. When she finds her baby, she gets happy. She cries and repents that she was careless towards the baby. She apologizes to the baby and the family. Naira tells them that she has seen Lav and Kush, but didn’t understand that they have the baby. She feels sorry and apologizes to the nurse for blaming her. Kartik also apologizes to the nurse. He was about to tell the baby swapping truth to Naira.

He takes his words back and regrets for his decision. Naira recalls that he was saying about some secret. She questions him and asks what had happened in the hospital, which the nurse is aware of. She says you have told us that nurse is blackmailing you. Nurse lies to them and says Kartik felt your baby is gone from the world and turned much upset, when I gave him his child, he got relieved, he was feeling he has lost his child, he got much sorrowful knowing his sister’s baby loss.

Akhilesh asks Kartik not to worry, anyone would react like that naturally. He asks Kartik and Naira not to take any stress and stay happy with their baby. Naira asks Kartik not to stay upset all the time, she is much worried for him. Kartik wants to hide his sorrow and not let his guilt come between his happiness.

Shivaansh is not able to understand Mannat and her weird ways. Mannat has become Nani’s favorite. Nani explains him that Mannat isn’t a wrong girl, but just her situation is bad. Mannat tries to win Shivaansh’s trust. Nani asks him to give a chance to Mannat. Shivaansh tells Nani that Mannat has done all the blunders, he isn’t wrong. He gets into an argument with Mannat. He blames her for the theft when he finds her opening the safe. She explains him that Nani has sent her to get some jewellery. He tells her that she has done a good job to act innocent and win Nani’s trust in a day’s time.

Shivani and Angad’s Shagun ceremony is happening. Mannat has done all the arrangements. She gets applauded by Nani. Varun pays the money to the pandit and plans something. He wants to ruin Oberois. Varun is cheating them.

They trust Varun and can’t imagine that he is their enemy. Pandit tells Nani about the mahurat. He tells them that women should wear Red chunri in Raatjagga, it will be auspicious. Nani agrees with the pandit’s suggestion. She instructs everyone to wear a red chunri so that they can keep the customs suggested by their pandit. Varun is up to his new plan. He hides his evil intentions from everyone. He doesn’t want Shivaansh to doubt on him. He goes away by tricking Radhika. He tells Varun also gets dressed in red bridal dress and goes to Nani’s room. He dances happily and tries to steal the will papers. He finds the will papers missing. He wonders where are the will papers. He finds the safe empty. There will be twists in Shivani’s marriage.