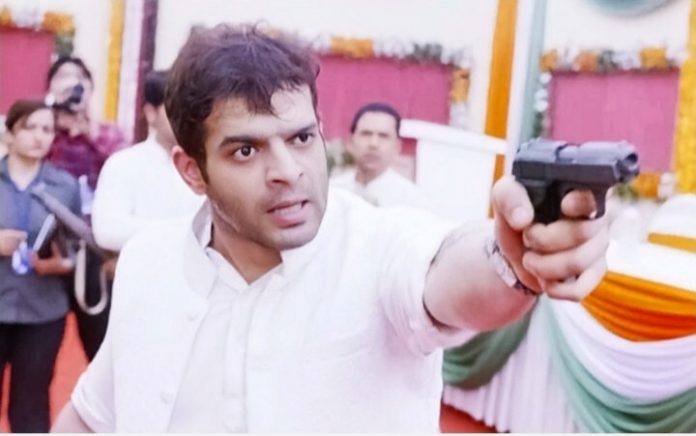 Yeh Hai Mohabbatein Drug twist. Raman gets drugged and visualizes his enemies in the minister. He threatens to shoot him. Ishita and Bala fall in trouble when the car breaks down. She wants to reach Raman soon. The police reaches Raman’s office to stop him from killing the minister. The family gets worried for Raman’s harsh move. Inspector asks Raman to put the gun down. Raman tells inspector about his enemies. Sudha gets glad seeing the news. Ishita meets Yug and gets help from him. The family is sure that Ishita will save Raman from this mess. Sudha asks them how can Ishita reach there in time. Sudha calls Raman a criminal. Karan too angers the family and tells Ruhi that Raman won’t be spared.

Ruhi asks him to get lost with his mum. She expects him to show some humanity. Karan strikes on the family in the tough time. Ruhi and Karan get into a heated argument. Rohan asks Sudha to just leave from Bhalla house. He knows how Sudha is enjoying Raman’s plight. Mihika wants Sudha to leave and not trouble them more.

Sudha wants to see how Raman gets jailed after killing the minister. Ishita reaches the office to talk to Raman and stop him. She asks guards ot let her go in if they want to save the minister. She asks Raman to stop and not harm anyone. Raman sees the enemies and tells her that Sudha has troubled him a lot, he will kill her. Ishita asks him to remember her and family.

She tries to make him realize the responsibility of their daughters. Raman stops for a while. His madness gets raging because of the powerful drugs. She asks him not to shoot at anyone. When he doesn’t listen, she asks him to shoot her first. She tests his love to save him from committing the crime. She is sure that Raman can never kill her. Raman loses his senses and prepares to shoot her, which shocks her further. The people get impressed with Ishita’s bravery, when she succeeds to calm down Raman. She tells Raman how much she loves him. Raman collapses down before shooting her.

Ishita worries for his state. She asks for medical help. She tells them that Raman is surely drugged by their enemy. Bhallas worry for Raman. Inspector tells Ishita that Raman will go to the hospital but under police custody. Yug gets to witness Raman and Ishita’s true love. He talks to his friends and tells them about Raman and Ishita’s huge mess. He tells them that he has helped Ishita in reaching Raman’s office. Yug leaves from there so that he doesn’t get caught. Pihu worries for Raman. She wants him to get fine.

Rohan pacifies her. Sudha wants Raman to land in jail. She tells Karan that she has drugged Raman to hallucinate. She explains her plan and tells him that she has framed Rohan in the act, since Bhallas will realize that Rohan has fed the spiked sweets to Raman and kick Rohan out of the house. She is sure that Rohan will return to them. Sudha manipulates the medical reports to trap Raman. Ishita learns about Raman’s arrest.