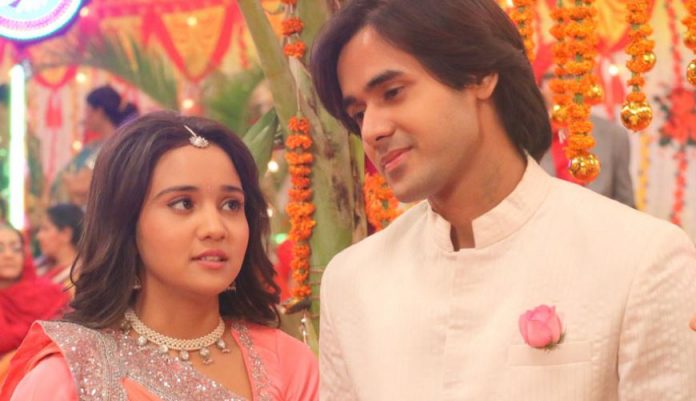 Yeh Un Dinon Surprise: Naina and her family arrive at Sameer’s place. They find the venue well decorated. They get a good welcome by Vishaka and Sameer. Naina celebrates Sangeet with Sameer and in-laws. Naina faces some taunts by Mami, who asks her about Rakesh’s absence. Naina and Bela get worried when Mami compels them to call Rakesh. Rakesh is upset with Naina, but he has no option than to end his annoyance. Mama and Mami show off their richness to Naina’s family. They try to insult Naina and her family. Mami asks Naina how can she be so selfish to get married in her father’s absence.

She asks Naina if she thinks she can live happy with her father’s blessings. Naina faces the numerous taunts and feels bad. Anand and Bela take a stand for her. Anand informs Rakesh about Naina’s tears. He tells Rakesh that Naina is crying because of her father’s adamancy. He emotionally blackmails Rakesh to come for the Sangeet function. Rakesh changes his mind and comes in the Sangeet function for Naina’s sake. Naina’s happiness gets doubled seeing Rakesh. Rakesh’s entry comes as a surprise for Sameeer and Naina.

Sitara:Sitara has turned revengeful. She wants to kill Viraj, whom she had loved before. Her love turns into hatred, when she learns that Viraj’s family has done injustice with Vrinda. Sitara fumes on the royal family. She has served them heartily before. She now conspires against them. Sitara attacks Viraj’s uncle, which makes him lose consciousness. The family worries for him. Viraj wants to find the attacker. Rajguru tries to help.

Aapke Aa Jane Se: Pankti realizes how her mum has separated Sahil and Vedika. She gets angered and asks her mum to leave the house. She can’t believe her mum again. She reprimands her mum for spoiling three lives. She threatens to commit suicide if her mum doesn’t stop her evil. Sahil wants to meet his baby. He sneaks into Vedika’s house at night and gets his baby with him. Vedika finds the baby missing and rushes to Agarwal house to inform Sahil. She finds the baby with Sahil and sighs a relief. She then scolds Sahil for stealing the baby. She breaks down and tells him the fear he has instilled in her by his move.

Sahil justifies his move and refuses to give the baby to her. He tells her that he has all the rights on baby. Vedika takes the baby from him. Sahil wants his baby to get his name and status in society. He has taken this step in anger. Vedika tells him that he is responsible for their separation. Sahil gets upset with her blames.

Jija Ji Chath Par Hai:
Ilaychi exposes Phutri’s truth to everyone. She tells Murari that Phutri and her dad are big fraud. She reveals how they were blackmailing Pancham and demanding money from him. She plays the smart move to trap the greedy people. Ilaychi succeeds to help Pancham. She also saves Murari’s money. Ilaychi gets Phutri arrested. Phutri reveals Pancham and Ilaychi’s love affair to Murari. Murari tells her that she trusts his daughter, Ilaychi can never like a guy like Pancham. He doesn’t believe Phutri.

Krishna Chali London:
Krishna and Veer have an argument. Krishna gets to know the good side of Veer. The truth of Radhe’s accident gets concealed by Sunaina. Veer gets glad to have Krishna with him since she has taken care of him. He doesn’t accept that he likes her around and wants her help. Veer gets upset when Krishna tels him that she has no interest in him and he lacks the charm that any girl would look for. Meanwhile, Shuklain falls in Bela’s ugly conspiracy and believes that Radhe’s soul is restless.