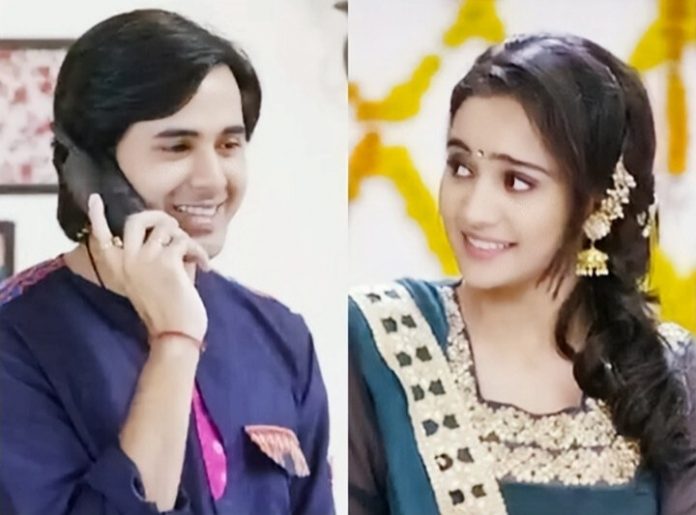 Yeh Un Dinon Ghatbandhan Roop and more: Yeh Un Dinon Ki Baat Hai: Naina and Sameer get worried thinking how their marriage will happen. They feel threatened by the constant hurdles coming in their marriage. They wish the marriage happens with ease and everyone should be happy about it. Naina fears that Sameer’s family will make an issue out of petty things if her family fails to meet their expectations. Both the families pray to God to stop the stormy rains so that Naina and Sameer’s marriage can happen. The rains eventually stop and everyone get ahead with the marriage function proceedings.

Shakti: Harman elopes from Police station keeping Sukha on gunpoint. He runs and reaches Soumya. Soumya tells him about Varun taking Soham in the jeep. Inspector catches him. Harman tells him that he has to go and get his son back. Inspector asks him not to fool him and says your wife is a baby thief and you are a runaway criminal. Harman pushes him and runs just to reach Soham, but the Inspector fires the gun at him twice. Harman gets badly injured and gets critical. Soumya shouts Harman. Harak Singh reaches there and bashes up Inspector.

Roop: Samru emotionally blackmails Manish telling him about Jigna’s condition. Manish calls Jigna and asks her to meet him later in the night. Ishika gets up in the night and couldn’t find Jigna beside her. She informs Roop. They come out of the house in search of Jigna and get shocked see her with Manish. Roop learns that Jigna is in love with Manish. He decides to support his sister. Jigna wants to get free from unwanted relations.

Roop supports Jigna in the court. He takes a stand for her and saves her from wrong accusations. He tells the judge how Jigna was facing much domestic violence at her in-laws house. He becomes a lawyer for Jigna. He doesn’t want anyone to call Jigna characterless. He tells them that Jigna has a right to live her life. She wants divorce from her torturing husband. Roop wins the case and gets justice for Jigna. Jigna gets her freedom just because of Roop. Roop wants Jigna to choose her freedom and happiness, which is her right.

Internet Wala Love: Rupa tells Dada ji that she wants to get Jai and Aadhya’s kundali matched for her heart and mind peace. Jai asks what’s the need as everything is going on fine. They get worried. He tells Aadhya that if both of their kundalis don’t match then he doesn’t want any problem to happen. Aadhya says nothing will happen as such, we are perfect for each other. Aadhya and Jai leave for Madhura in the car with Ragini and Karan. Aadhya and Jai’s hand get entangled by her bangle. Ragini breaks the bangle with evil intentions. Ragini and Karan are a new threat to Jai and Aadhya’s relation.

Rajaa Beta: Vedant and Dadi figure out about the real culprit. Dadi asks him to get Gomti arrested for Purva’s release. Vedant asks her if she thought how Police will handle Gomti after knowing that she did everything deliberately just to frame Purva, not thinking about the consequences arising from her wrong deed. He tells that he can’t get her arrested and thinks of some other way to help Purva. Dadi asks him to think about his wife. Gomti who hates Vedant tells them that Vedant will choose Purva and not her.

Dhanak and Raghu get arrested when police raids the red light area. Dhanak pleads her innocence. Inspector gives her few hours time to prove her innocence. Dhanak breaks down. She meets her dad and seeks his help in gaining the evidence. Her dad tells the inspector that Raghu is Dhanak’s husband. Raghu and his mum deny to identify Dhanak and help her. Dhanak’s dad requests Raghu’s mum to help Dhanak. Raghu’s mum accuses Dhanak for her bad character. She gets into an argument with Dhanak’s dad.

Dhanak’s dad tells inspector that Dhanak is married to Raghu. Dhanak denies the marriage. Raghu planned this police station drama so that Dhanak accepts their marriage. Raghu wants to teach a lesson to Dhanak. He asks her how will she prove her innocence without his help. Raghu gets scared of a rat. Dhanak saves him. They both end up arguing.