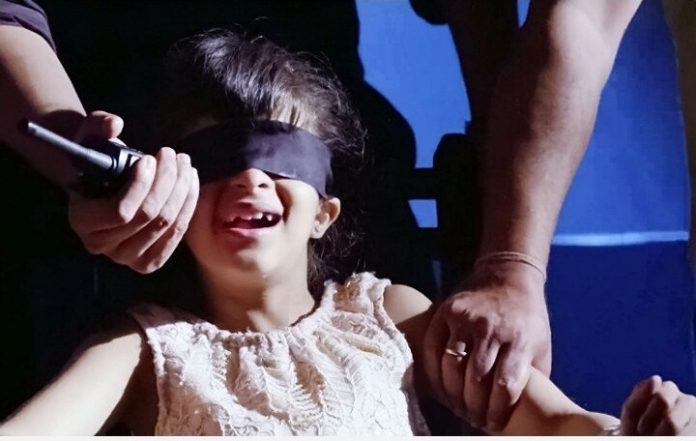 High Voltage Drama in Kumkum Bhagya: King arranges the money and thinks to give money to the kidnapper. Pragya gets early labor pain due to stress. Disha calls the doctor. Abhi comes to Tanu’s house. He makes a guy call her name as courier guy. Tanu tells him that she doesn’t want any courier and opens the door. She sees Abhi standing on the door. Abhi breaks the wine bottle kept there and keeps on Tanu’s neck asking her to tell about Kiara’s whereabouts. Tanu gets scared and tells him that Kiara with Nikhil as he has kidnapped her. Abhi is shocked and swears to Tanu to kill her if he doesn’t get his daughter back.

Tujhse Hai Raabta: A new entry enters Kalyan’s life with the intention to ruin her and blames her for his sorrows. He determines to kill her. Later in the night, he spies on Kalyani, when she notices someone’s presence seeing the man’s eye and informs Malhar. Malhar checks outside the room, but there is nobody there. Kalyani comes to know that Sarthak is single and finds him to be a good match for Anupriya, while she speaks to Malhar. Malhar’s hand is melting for Kalyani see how she is handling Sampada and holding respect for him.

Kundali Bhagya: Rakhi comes to Preeta’s house and invites them for Maha puja of Maha Shivratri. Sarla says even they will have a puja at home. Rakhi asks them to come and says you are family to us. Preeta pulls Karan’s ears, while he shouts. Everyone looks at them. Karan is happy that Rishabh’s marriage is postponed. Sherlyn wants marriage to happen at the earliest.

Rajaa Beta: Vedant and Purva dance during the Mahashivratri celebrations. Pankhudi gets jealous and asks Purva to go and meet Rahul. She gets a message from Rahul again asking her to meet him in Jeevan Rekha hospital and not to punish him as he has less time and getting punished for his sins. She shows the message to Pankhudi. Pankhudi raises doubt in Purva’s mind and says if Vedant knows about Rahul. Purva asks why did Vedant hide from me, about Rahul being in Jeevan Rekha hospital. During the celebrations, Dadi asks Vedant to make Purva wear the garland. Vedant happily turns to Purva, but Pankhudi is standing on her place waiting to wear garland with Vedant’s hand. Purva goes to Jeevan Rekha hospital to meet Rahul. Vedant understands Purva went to meet Rahul and makes an excuse.

Also read, Ek Thi Rani Ek Tha Ravan: Rani brings Rukmani to Rivaaj’s house and makes her gain consciousness. She decides to expose Rivaaj’s evilness, but Rukmani tells that she will marry Rivaaj after whatever he has done with her. She tells Rani that she will marry him. Rani makes Rukmani sit on the mandap. Electricity goes while the marriage is happening. Rivaaj doesn’t see the bride’s face because of the veil. He gets married to Rukmani. Pandit ji declares them husband and wife as the marriage solemnized. Raghav comes there and tells Rivaaj that he wants to click the bride pic. Rivaaj lifts her ghunghat and gets shocked seeing Rukmani. He accuses her of marrying him by the cheat. Rukmani tells everyone that she never eloped, and talks to Rivaaj alone, threatens to reveal his truth if he doesn’t accept her. Rivaaj is forced to accept Rukmani as his wife.