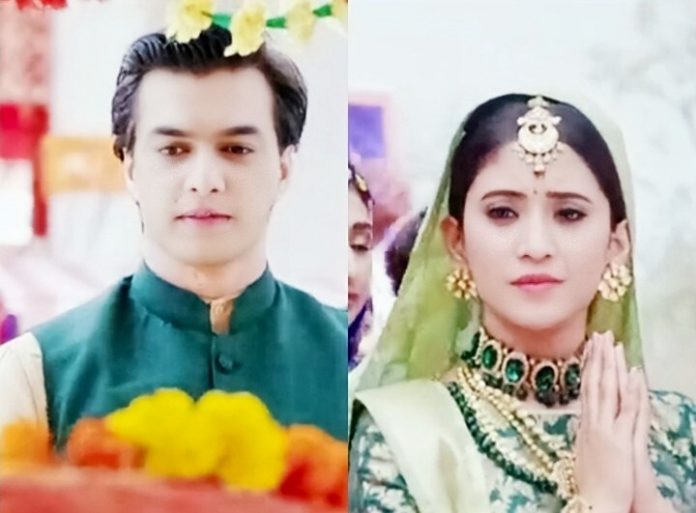 Yeh Rishta Unpredicted Love Confessions. Naksh stays protected about Naira. He apologizes to Naira and tells her that he doesn’t keep anything in his heart and vented out anger. He doesn’t want Naira to be upset with him. Naira doesn’t like sharing anything with him. Kartik gets questioned by Manish. He is relieved that Manish doesn’t know the truth. Manish asks Kartik if he is upset. He tells Kartik that he doesn’t want him to meet Singhanias. He worries seeing Kartik’s wound. Kartik understands his concern. Naira understands Naksh’s concern, but doesn’t like over possessiveness. She asks Naksh to let her meet people and know them well. She tells Naksh that he can correct her if she does anything wrong and he can always bring her to the right path if she gets mislead. She wants to experience her life on her own.

Manish wants to get his answers from Kartik. He gets scared of Kartik’s silence. He suspects Kartik for doing wrong again. He asks Kartik is he still connected to Naira. Naira takes Naksh’s advice that she should speak up her feelings. She wants to meet Sid and declare her love. Manish warns Kartik that Naira and her family shouldn’t get hurt because of his foolishness.

Meanwhile, Naksh finds Kirti upset. Kirti tells him that she felt insecure when Naira took Krish. She reminds him that moment and asks him if he felt bad too. He tells her that he realizes her tension, but whatever Naira told was in favor of Krish. She asks her not to get bothered by thinking of Naira’s rights on Krish. Kirti fears that she will lose Krish. Kartik doesn’t want to stay away from Naira. He is happy that Naira still likes him. He is sure that his love will bring back Naira to him. He has a belief that his love story will complete. Naira prepares to meet Sid.

Rajshri and Varsha visit the Singhanias after a long time. Rajshri doesn’t have any courage to meet Naira. She expresses her sorrow over Naira’s memory loss. She doesn’t want to appear like a stranger to Naira. She tells Naksh that she can’t face Naira by losing her bond. Everyone asks Rajshri to meet Naira with a smile, else Naira will be more upset. Naksh fails to know that Naira has sneaked out of the house. Rishabh arrives home to meet Naira. She hides from him and runs out. The family is remorseful about Naira and Kartik’s broken relation and the fact that Naira doesn’t remember them.

Devyaani breaks down when she learns that Mishti hates her. She remembers the last time when she had to send Mishti away with her parents. She was helpless to end ties with her ungrateful son Naman. She had given the responsibility of Mishti’s future in Rajshri’s hands by trusting her. Rajshri has raised Mishti along with Kuhu. She tells Devyaani that Mishti loves her a lot, but misses everyone. Kartik gets surprised when he finds Naira at his window. Her sudden arrival takes him aback. Kartik saves her from falling down and gets her inside, while Manish barges into his room to discuss the new project. Kartik doesn’t let her watch the projector playing their marriage pictures.

He stops Naira from learning the truth. Kartik switches off the lights and gets saved from Manish. He wants to know why did Naira take big risk and come to meet him. He asks her what was so important that she has come this way to meet him. Naira asks him why is he so scared, than being happy to see her. Naira declares her love for Sid. Kartik becomes overjoyed that his belief and hopes won over all odds. Naira tells him the golden words, I love you. Kartik can’t believe his ears and melts his heart down by the immense happiness. Naira proposes Kartik for marriage in a cute way. Naksh and Manish become their love barriers once again.