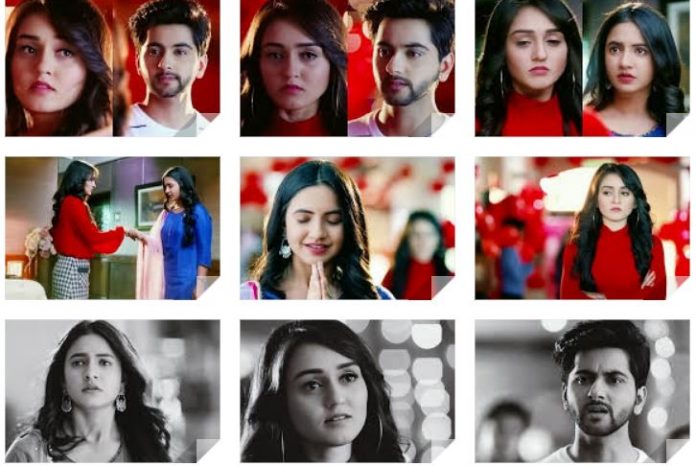 Udaan Sitara Dil Toh Happy: Anjor changes the script of the show to insult Chakor. She tries to prove how Chakor has abandoned her daughter. Chakor faces much humiliation because of Anjor. She vents anger on Anjor. Anjor has a misunderstanding about Chakor. She wants to take revenge on Chakor. She doesn’t want Chakor to act great in front of everyone. She has expressed her real emotions in the play. Sameer gets upset with Anjor. He reveals that Chakor is his aunt, she stays at his house. Anjor gets angry on his lie. She ends friendship with Sameer. She knows Sameer loves him, but she doesn’t believe in love. Sameer and Anjor have a fight. Chakor gets troubled in the college because of Anjor.

Sameer wants to fix things up and save Chakor. Chakor gets questioned for writing such a demeaning speech and insulting the beautiful nature of a mother. Sameer ignores Anjor. He maintains that Anjor is not deserving of him, since she always hurts others to satisfy her ego. Sameer feels he is foolish to love Anjor. Sameer doesn’t want Anjor to trouble Chakor. Chakor tries to clarify that the script was something else and she isn’t responsible for this. Will she expose Anjor’s cheap plans?

Sitara:
Viraj tells the family that he will be marrying Sitara, not Surili. He expresses his love for Vishkanya Sitara. He knows Sitara’s truth and even then he accepts her in his life. Vrinda gets much angry with this decision. Viraj’s dad Ratan is glad that Viraj has chosen Sitara. He tells Viraj that he will be happy to accept Sitara as his Bahu. Vrinda gets furious and asks Ratan how can he go against his word, since he promised to get Viraj and Surili married. Ratan tells her that he already said, Viraj will take the last decision and if Viraj wants to marry Sitara, he is with his son. Vrinda fails to break the alliance.

Viraj tells Ratan that he wants to marry Sitara right away. Sitara warns Vrinda against hurting her family. Ratan hugs Viraj and Sitara, and blesses them. Sitara asks Viraj if he loves her so much that he asked for her hand in front of everyone. Viraj tells her that he loves her a lot and can’t express in words. Sitara feels lucky to get Viraj’s love. She thanks Viraj for always being a good support to her. Sitara meets Vrinda and her aunts. She warns them against interfering in her marriage.

Ek Thi Rani Ek Tha Ravan: Rivaaj comes to Rani’s room and tries to come near her. Rukmani comes there. Rivaaj makes an excuse. Rani helps Rukmani to make first rasoi rasam and sets the table outside. Everyone likes the food made by Rukmani. Prem Latha wants revenge and can’t bear Rani and Rukmani in the house. She asks Shivraj to make Rani go from there and says if party men see her then will make an issue and then they can’t handle them. Mama gives juice to Raghav so that he reacts badly. Raghav gets hysterical and tells that he can’t let Rani go. He tells that Rani will not leave. Later, Rivaaj comes to Rani’s room later in the night.

Rani asks him to go. Rivaaj tells that he knows his limitations. He says you think of me as a Ravan, even Ravan knew his limitation, so am I. He says Rukmani has to leave from between us so that we can unite. Rukmani calls Rani. Rivaaj and Rani look on tensed. Raghav and Rani have a cute moment. They both fall for each other. Their romance is seen once again. Rivaaj and Rukmani have an argument. Rivaaj doesn’t want to accept Rukmani. He feels he got cheated by Rani. He wanted to marry Rani. Rani will take a stand for Rukmani’s rights.

Dil Toh Happy Hai Ji:
Rocky and Happy perform in the party in a romantic way. They try to please Anaya and win Grover’s investment for Chintu’s hotel business. Rocky gets falling for his brother’s widow. Rocky didn’t acknowledge Chintu and Happy’s marriage ever. Happy too didn’t believe in that relation. But they both miss Chintu a lot. Rocky goes in dream world when he dances with Happy. Rocky gets such feeling for the first time and wonders what’s happening. The party gets a big twist when Ranveer falls in trouble. Rocky gets on laughing on Ranveer’s misery.

Happy tries to manage the matter by covering up Rocky’s mischievous laughter. Happy makes everyone applaud for Anaya’s rocking birthday. Grover gets happy with the way Happy manages the little problems. He decides to give a chance to Happy and invest in the hotel project. Sania gets revengeful against Happy further knowing Happy has saved everyone’s lives and also the event from crashing. She wants to break Happy and Rocky’s friendship and strike at them.