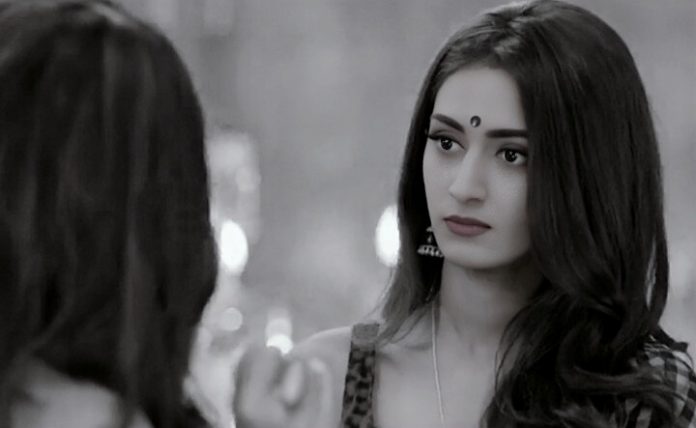 Kasautii Komolika Prerna ugly fight. Anurag knows Prerna has taken the disguise of the Sardar. He hugs her and wishes that she always stayed with him. He knows that their union will just invite problems for her. He tells her about her beard coming out and asks her to fix it before Komolika sees her. He knows she has done this to get the papers. Prerna tells him that she knows he wants to get her caught. She pushes him away and runs out to Anupam. Anurag wants her to succeed. Chobey informs Komolika about the fake raid and asks her to stop the fake IT officers. He asks her to call the police and get them arrested.

Komolika doesn’t doubt that its Prerna. Komolika stops Prerna and team from leaving. She removes Prerna’s fake beard. She catches Prerna and her team. She snatches the papers from Prerna. Anurag feels helpless seeing them. Komolika and Prerna get into a heated argument. Anurag doesn’t want Komolika to hurt Prerna. He shows his fake hatred towards Prerna. He asks Komolika not to fall low as Prerna.

He praises Komolika as his wife. He asks Prerna to get lost. Prerna fails in her plan. Anupam gets worried for her. Anurag calms down Komolika’s anger so that she doesn’t think of exacting revenge on Prerna. She asks him why does he always want her to forget Prerna. He asks her to think about him and their relation. She apologizes to him and falls in his words. Prerna tells Veena that she failed to get the papers. She cries and feels sad. Veena encourages her to give a solid reply to Komolika.

She doesn’t want Prerna to accept defeat. Mohini wishes that Moloy gets fine and comes home soon. Prerna turns strong and returns to Basu house to initiate a new fight. Prerna challenges Anurag and his family. She is sure that Komolika will never take her place in Anurag’s life. Anurag and Komolika are together for the family’s sight. Mohini thinks Anurag loves Komolika now. She wants their marriage to work. Komolika plans to get Prerna arrested.