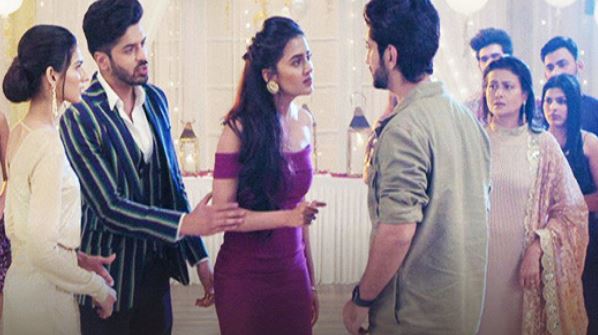 Silsila Mishti Ruhaan budding bond. Mishti gets happily surprised by Veer’s gestures. Everyone plans to surprise her even more. Veer wishes her on her birthday. Mishti tells him that she is missing her family and wants to be with them. Veer tells her that her wish will be fulfilled soon. Mishti gets a wonderful surprise from her family. She gets delighted to get her day completed with them. She thanks Veer and tells him that the surprise is just perfect. Veer very well knows that family means a lot to him. Mishti gets emotional by his love confession. Ruhaan gets uneasy seeing their romance. Pari doesn’t let Ruhaan leave from the party.

Veer asks Mishti to feed the cake to Ruhaan. Ruhaan too demands this and asks Mishti not to behave alienated always. Mishti gets another big surprise from Veer. Mishti refuses to accept the costly car before marriage. She wants to accept it when she is wedded to Veer. Veer invites his friends in the party. Ruhaan too catches up with his old friends. Ruhaan gets mesmerized with Mishti. Veer introduces Mishti to his friends. Veer’s friends compliment him for getting a pretty girl.

Ruhaan enjoys with his friends. He tries to keep himself distracted. Ansh dances with Taani. Arnav gets protective about Taani. He doesn’t want them to drink alcohol at a young age. Taani is happy that Arnav trusts her a lot. Pari gets mistaken that Ruhaan is interested in her. She asks him for a dance. Mishti can’t ask for anything more better. She wonders why is she not happy with Veer. Ansh and his friend go to Ruhaan’s room to steal some cigarettes. Veer’s friend misbehaves with Pari.

Pari gets much upset and defines the limits he should maintain. She asks him to stay away. She doesn’t want to scold him aloud, so that Mishti’s birthday doesn’t get spoiled. She tries to handle the matter in a way that none knows about it. Mishti finds the guy misbehaving with Pari and reacts in anger. Mishti doesn’t care for her birthday party and shames the guy for his cheap behavior. Mishti starts blaming Ruhaan for calling such friends home. She tells Ruhaan that his friend is disgusting, he was misbehaving with Pari. Pari doesn’t want the party to end on a bad note.

Mishti tells Pari that the guy was trying to kiss her, without her knowledge and consent. Ruhaan and Arnav get angered knowing the guy’s mistake. Veer learns the matter too late, when Mishti scolds Ruhaan. Mishti asks Ruhaan to keep some manners. She asks him why didn’t he ask her before inviting his cheap friends. Veer tells Mishti that he had invited his friends, Ruhaan is at no fault at all, Ruhaan had suggested him not to invite them. Mishti asks him not to take Ruhaan’s side. She feels he is taking blame on himself to cover up Ruhaan’s mistake. Ruhaan bashes up the guy and punishes him for misbehaving with Pari. Pari realizes her love for Ruhaan even more when she finds Ruhaan defending her respect. Veer still maintains that Ruhaan isn’t at any fault. Mishti gets raged up and kicks out Ruhaan from her house. How will this affect Veer and Mishti’s relationship? Keep reading.