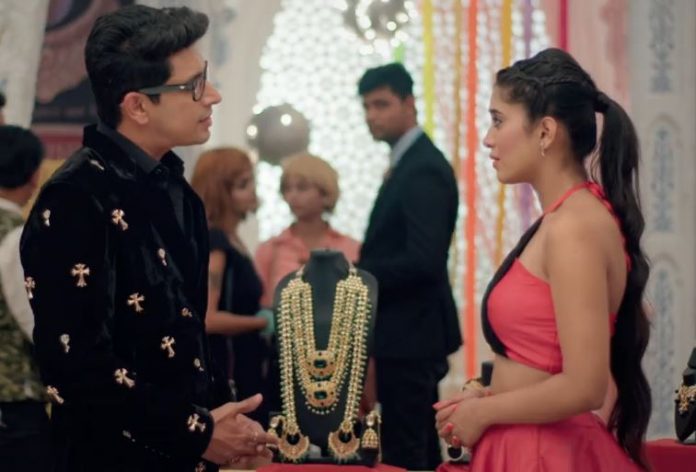 Yeh Rishta New Entry of Mihir. Kartik feels bad that he couldn’t convince Mihir to come in the souk. Naira asks Kartik when is Mihir going to come, so that she can go and announce on the stage. Kartik gets busy before clearing her confusion. Akhilesh takes Kartik to introduce him to the big buyer. Naira feels she is stupid to ask the same thing again and again. Naira comes across Mihir and loses confidence, when he shows her a broken necklace. She tells him that the design is such, its not broken. She didn’t think she will meet him in such a situation. He tells her that she can’t be a good designer if she doesn’t accept that the necklace is broken, she can lie and sell the necklace by calling it a design.

He asks her to think if she wants to become a designer or a seller. Naira feels bad. She takes his advice and thinks of her mistake. Manish and everyone praise Naira for designing the jewellery. Dadi praises Kartik and tells the people that Kartik has managed everything, while Naira is just lending some help. Mihir stops the media from clicking the pictures of the jewellery. Kartik meets him and thanks him for coming to surprise Naira. Mihir tells him that he has come to choose the jewellery for his client, not to meet Naira.

Mihir tells Kartik that he has already met Naira. Naira finds Mihir leaving. She tells Kartik that she has met Mihir but he didn’t like the designs. She tells how Mihir has criticized her designs. Manish asks Kartik and Naira to make the announcement of the modeling show. Naira wonders where are the models. Manish asks them about the models, since its time now. Kartik tells them that the models will be soon coming. He goes to make the announcement that the show is soon going to start. Mihir waits to see the modelling show. Naira learns that the models won’t turn up today, because of the blunder she has made in the mail.

Naira argues with the modelling agency head. He tells her that he isn’t at fault, she has mentioned the wrong date and now its her responsibility to cover up for the loss. Naira feels sorry that she hasn’t checked on the modelling agency confirmation. Kartik and Naira get troubled. Dadi learns their problem. Mihir refuses to take selfies with the girls. He appears arrogant. Manish and Akhilesh ask Naira about the show’s delay. Dadi scolds Naira for her mistake. She asks Naira why did she become great and didn’t give the duties to others. Kartik tries to defend Naira. Samarth and Gayu calm down Dadi and ask Kartik to think what will they do. Dadi tells them that they can’t get models so soon.

Manish and Kartik ask Dadi not to blame Naira and break her courage, since Naira has worked hard. Naira gets an idea and urges the family to model for the show. Kartik announces the traditional dance to buy some time. Suwarna and Kirti perform on the stage and get some time until the models are ready. Mihir wants to leave from the souk when the modelling show doesn’t start. Naira makes an announcement that not just the models or young girls, even the elderly women like to wear jewellery. She presents the unique designs worn by the unique models, the women of the family. Dadi, Bhabhimaa and others walk the ramp and prove out that they are the best.

Naira feels proud of them. Kartik and Naira ask the people to review the show and designs. They want to know if their designs are good. They thank everyone for coming in the souk. The customers praise Kartik and Naira for their wonderful event and designs. Mihir doesn’t answer anything and makes a leave, which worries Naira.