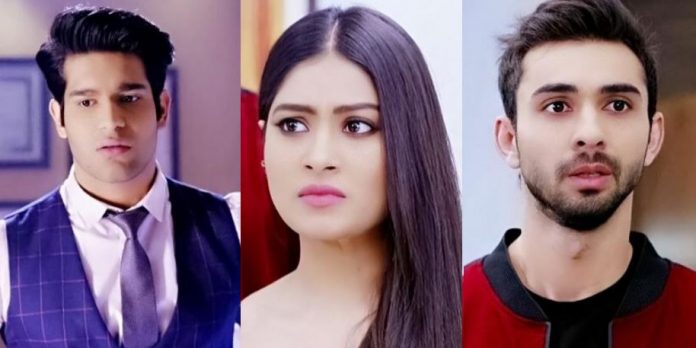 Yeh Hai Mohabbatein Grave twists. Ishita tells Raman and Rohan about Sahil’s evil plans to tag Ruhi as a terrorist. She tells them that Sahil is framing Ruhi and even they can’t help her in such a case. She tells Raman that they can’t save Ruhi, since Sahil has the evidences against Ruhi. She is worried for Ruhi. Raman asks her why didn’t she tell him before. She tells Raman and Rohan that she can’t involve them, she doesn’t want them to fall in danger. She tells about the dangerous powder, which can be anything. Rohan tells them that he really wants to help them. He is ready to do anything to save Bhalla family from Sahil’s madness. Rohan asks them to let him help them. Raman agrees to take Rohan’s help. Karan apologizes to Rohan.

Rohan doesn’t tell anything about Bhallas troubles. Raman learns about the bugs, how Sahil is watching them all the time. He makes a plan to fake a fight and confuse Sahil so that they can find some way to diagnose the problems well. Ishita agrees to Raman’s plans. Karan learns that Rohan had gone to meet Ishita. Rohan doesn’t want to put Karan in trouble. He hides the entire matter from her. Karan wants to know what’s Rohan hiding. Raman finds Ishita tensed and calms her down.

They both execute their drama to fool Sahil. Raman assures her that none can harm her as long as he is with her. Sahil keeps a watch on them. He watches them live and finds them quarrelling. He gets tricked because of Raman and Ishita’s plans. Raman gets emotional for Ruhi. He wants to protect Ruhi. He can’t believe that Sahil has trapped Ruhi so badly. Sahil is happy that Raman and Ishita are behaving normal, but he is still suspicious. He knows they are smart people and may make any hidden plans. Bhallas surprise Aaliya and Yug by calling a pandit home and getting their marriage fixed. Everyone becomes part of the auspicious moment. The pandit gives the date for the marriage.

Ishita is happy after seeing Adi in Yug. She wants to support Aaliya and Yug as well. Shagun and Mani have no objection with the new relation forming. They are happy that Aaliya will become Bhallas’ Bahu again. Rohan turns up as per his plan to help Raman and Ishita. He arrives at the wrong time and learns about Aaliya’s marriage getting fixed with Yug. He gets much depressed. Aaliya feels sorry to hurt him and feels that she should move on in life with Yug. She declares her decision that she wants to move on with Yug since she has fallen in love with Yug. She seeks Rohan’s permission for her new phase of life. Rohan turns emotional and tells her that he is much upset to lose her but since he loves her, he wants her to stay happy. He accepts his fate that she was never meant for him.

He tells her that he will do anything for her happiness. He apologizes for misbehaving with her. He makes a promise that he will always stand by her and try to not come in the way of her happiness. He is sure that Yug will keep Aaliya happy. He wishes them all the best. Ishita feels sad for Rohan’s heart break. Bhallas want to keep the wedding soon. Sahil finds them celebrating and decides to ruin them down. He wants to strike Bhallas and ruin their happiness so that he punishes Muskaan’s murderer. Raman gets rude towards Rohan and doesn’t want to have ties with him, since Aaliya has chosen Yug. Raman is confident that he can protect his family himself, without the help of anyone.

The family makes plans and divides the arrangement tasks. Sahil has many plans in the making. He just wants Bhallas to suffer, be it anyway. Sahil targets Bhallas by his hidden aides. Raman gets the powder from Rohan. He hides it and takes help from Mani to get the powder tested in a trusted lab. Mani acts in front of the family, since Sahil is watching them every moment. Mani assures Raman that he will handle everything. Yug wants a simple wedding. Raman wants to keep a grand wedding for Aaliya and Yug, as per Bhallas’ style. Raman and Mani make excuses of the work and leave from the home. Sahil meets Ishita to get the powder box back. She falls in new trouble when Sahil declares her revenge plan to ruin Aaliya and Yug’s marriage.