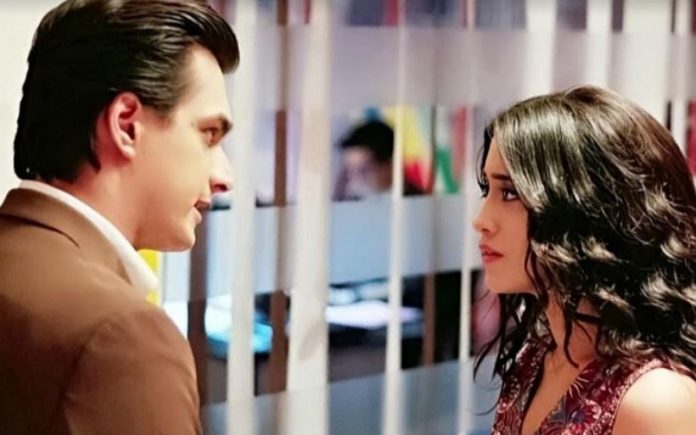 Yeh Rishta Kehlata Upcoming Dadi learns that Kartik and Naira were together in the picture, but Kartik’s picture was cropped and just Naira’s picture was posted. Kartik gets upset and hides his feelings. Dadi and the family give mixed reactions on this issue. Manish tells Dadi that magazine reporters always do such things, its not a big issue. Naira feels bad and she gets angry on the reporters. Kartik calms her down. He asks her to end this matter here. Devyaani is affected by the new maid. She is in tension and keeps an eye on the maid, so that nothing gets stolen from the house. Naira tells Kartik that the clients are really celebrities and she has to reach their mark.

Kartik doesn’t tell her that he is unwell. He doesn’t want her to cancel the meeting because of him. He takes medicines without coming in her notice. Naira hugs him and tells him that she will miss him a lot. He tells her that he loves her a lot and he won’t stop her from progressing. He asks her to go for the work trip. They have a moment of romance. Kartik gets a message from his manager and instructs him to make changes in the designs. Naira tells him that she is lucky that her designs got chosen so soon. He gets upset even when she praises him.

Devyaani thinks the maid is sleeping and goes away. The maid is upto a conspiracy and badly eyes the jewellery in Kirti’s room. She tricks Devyaani. Manish asks Naira to give her best in the meeting and make Goenkas more proud. He tells Kartik that Jadejas aren’t confirming the designs. Kartik angrily wants to dismiss the clients’ order. Naira informs the same trouble to Kartik. Mihir tells her that he can’t help her in this matter. He tells that both the bride and groom’ families are rivals, so Goenkas are his rivals too.

He asks Naira not to bring personal relations into business. She tells him that she won’t compete with her husband, else she will choose her relations over everything. He gets upset with her. Kartik learns that Naira’s designs are much better and his designs aren’t approved. He angrily asks clients to get designs by Naira itself.

He doesn’t tell anything to Naira. He learns that the clients are ready to give the order of the designs. Kartik gets surprised that everything got sorted so easily. He then learns that Mihir had helped him and got his designs approved. He asks Naira why did she talk to Mihir about them, as if Goenkas can’t manage anything on own and need external help for their business.

He scolds Naira for lowering their esteem, he is into the business since years and he can handle it. He tells her that he has ruined Goenkas image by taking Mihir’s name. Naira gets upset when he reprimands her when she had good intentions. She leaves for the work.

Kartik feels sad and calls her. They both apologize to each other and express love. She tells him that she didn’t feel bad of his words. She spots the maid on the way and informs Kirti. Kirti thinks the maid is sleeping in the room and gets tricked. The maid steals few things from Singhania house. Kartik falls sick. Dadi and Suwarna get caring for him. Dadi is angry that Naira isn’t with Kartik at this time. She asks Manish to call Naira home. Kartik asks Dadi not to call Naira back. Dadi calls Naira and informs about Kartik’s sickness. She demands Naira to come back home. Dadi angrily yells at Naira. She blames Naira for failing to do her duties well. Everyone prepares for Krish’s Annprashan ritual at Singhania house.