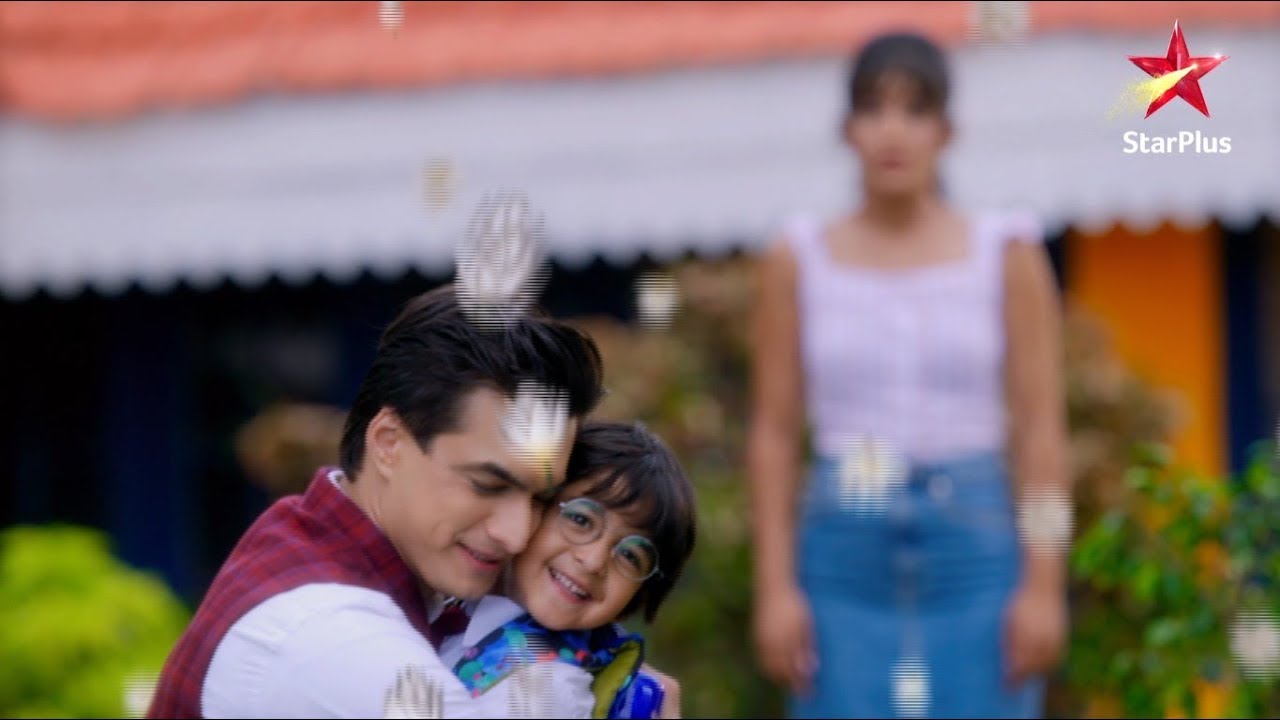 Star Plus Top Rated Yeh Rishta 24th June 2019 Kartik tries to borrow a power bank to switch on the phone and talk to Kairav. He thinks he can’t dial on any random number and waste more time, Kairav maybe in real trouble. He gets worried. He feels guilty that he has not stopped Kairav from taking this step. He feels he should have not lied to Kairav and spoke to him like his father, which led to this outcome. Kartik gets a power bank from a couple and quickly switches on his phone to make a call to Kairav. On the other hand, Naira is worried when she finds Kairav missing at the school. She finds the kids leaving. She doesn’t see Kairav and asks the teachers about him.

Naira tells them that Kairav came to school. Teachers tell her that they didn’t see Kairav in the class, he didn’t come. They thought maybe he didn’t come knowing his dad won’t come for the football match. Naira gets worried knowing Kairav has gone out of the school. Kairav tells the stranger that he doesn’t want to talk to him. The stranger befriends him. He lies to take him to his dad. He goes to call someone. He asks Kairav to sit on the bench and not go anywhere. Kartik calls Kairav to know about him. Kairav tells him that he is with a stranger, who promised to help him and take him to Kartik. He tells that bus conductor didn’t let him board the bus. He wants to reach Udaipur soon. Kartik asks Kairav not to go with any stranger.

Kairav tells him that not all strangers are bad, and this stranger looks good. Kartik asks him to go home and listen to him. Kairav tells him that he won’t go anywhere, he has to come to Udaipur and take him. Kartik gets helpless and finds him stubborn. He promises to come to Goa and meet him. He convinces Kairav to go home. Kairav gets too happy. Naira looks for Kairav at the school premises. Guard tells Naira that he had met Kairav in the morning, maybe he had run away by tricking him. Naira gets angry on him for being careless.

The stranger gets the cop to show the little kid. He tells the cop that he didn’t wish to scare the kid by getting him to the police station. He misses to see Kairav. He thinks he should have not left Kairav alone. Kartik asks Kairav to play a game with him and run to some safe place. Kartik asks him to go home if he knows the way. Kairav tells him that he reached the park, but doesn’t know the way to home. Kartik asks for Naira’s number. Kairav tells him that he doesn’t remember the number. Kartik calls the cops to take help for Kairav. He asks Kairav to stay at the park. Cops ask Kartik to send Kairav’s picture so that they can find him.

Kartik asks Kairav to describe the place and stay with the people. Naira gets angry on D’Souza and wants her answers about Kairav. Kartik asks Kairav to send his picture so that he can help him. Kairav sends him the pictures. Kairav is happy to talk to his dad. Kartik sends the pictures to police. Naira plans to get D’Souza’s phone traced so that she can reach Kairav. She knows Kairav wanted to talk to his dad. She thinks she has done a mistake to underestimate Kairav’s craze for his dad. Inspector asks Kartik about the kid’s name. Kartik doesn’t know Kairav’s name and thinks how to ask him, Kairav would doubt on him if he asks the name. Inspector asks Kartik to send clear picture of Kairav.

Kartik asks Kairav to send his picture, he needs his selfie right now. Kairav’s phone gets off suddenly. Kartik doesn’t get his picture. Naira looks for Kairav. Kartik calls for arranging a chartered plane to fly to Goa as soon as possible. He leaves all his meetings. Naira reaches the police station to find Kairav. The police inspector thinks if he is the same kid about whom Kartik informed them. He helps Naira and asks her to head to Goa Carnival event. Naira gives them Kairav’s picture.

Kairav feels hungry. He drops the tiffin by mistake. He stays happy that his dad is coming to meet him. Kartik rushes to reach Goa. Naira and her friend rush to reach the Carnival and find Kairav. Kairav waits to meet his dad and surprise Naira. Dadi decides to accompany Vedika to Goa, since Kartik has gone for the important meeting. Suwarna and Manish worry knowing Kartik isn’t going to Delhi. Vansh shows the trophy he has won. Manish tells Vansh that Goenkas always wins. Gayu wants Samarth to accept Vansh completely. Kairav dances with the people. He imagines his dad. Kartik arrives there to meet him. Kairav thinks its the special day when he will be meeting his dad. Kartik finally meets Kairav.