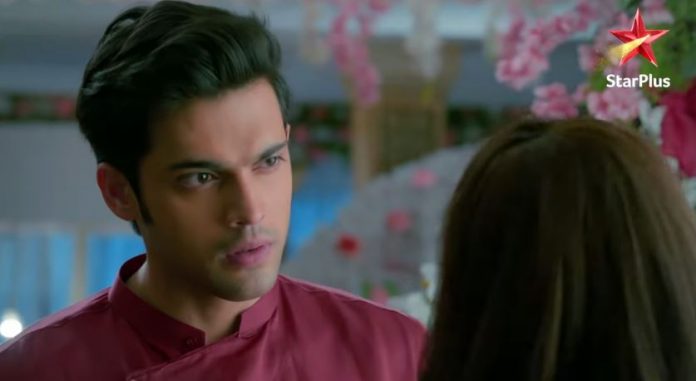 She tells that Veena deserved the humiliation. Prerna asks her why did she pretend to be happy if she didn’t accept by heart. Mohini tells her that she couldn’t explain to Anurag that Sharma family is greedy. She feels Prerna is a gold digger and using Anurag for her motives by faking love. She doesn’t believe in Prerna’s true love. She tells Prerna that she will fail in her aims. Prerna feels Mohini doesn’t identify people well. She reminds Mohini how she has fallen in Komolika’s trap. She tells Mohini that she is true by heart and loves Anurag.

She wants Mohini to understand their love, else she will regret later. She warns Mohini and asks her to not hurt Veena further. Prerna asks Mohini to think of Anurag’s happiness. She tells her that she loves Anurag, not his richness. Mohini yells at her to throw her out. Anurag and Shivani discuss about a surprise for Prerna. Anurag wants Prerna to be happy. Shivani feels Prerna is lucky to get a life partner like Anurag. He feels he is more lucky to get Prerna in his life. He meets Prerna and tells her that he has a big surprise for her.

He plans their honeymoon in Switzerland. He asks Prerna where did she go, when he was waiting for her. Prerna feels bad for him, since he doesn’t know his mum’s plans. She goes home to talk to Veena about Mohini. Shivani tells Prerna about Anurag’s surprise. Prerna cries and breaks down. Shivani worries for her and wants to know the reason. Anurag calls her up again and again. She doesn’t answer his call. Anurag gets to see Ronit again in the middle of the road. Ronit gets Anurag’s attention and runs. Anurag falls in his plan and follows him. Ronit enters Mr. Bajaj’s factory this time. He decides to kill Anurag and take his revenge.

Prerna gets upset over her life and love. She reminisces the moment with Anurag and cries. Anurag asks Ronit what is going on with Mr. Bajaj’s business. Ronit tells him that he has got him trapped and now he will kill him. He tells Anurag and Prerna will always suffer in their lives. He is sure that he will kill Anurag and Prerna will shed blood tears for his death. Anurag asks him to stop his nonsense. They both initiate a fight. Ronit injures Anurag.

The factory catches the fire. Mr. Bajaj learns about the fire incident. Anurag falls down injured, while Ronit flees from there. Prerna checks Anurag’s missed calls and calls him back. Anurag answers her video call. Prerna gets a huge shock knowing he is in big trouble. She gets the location of the factory and asks him to stay safe until she comes. Prerna reaches to save the love of her life. Prerna risks her life to save Anurag.