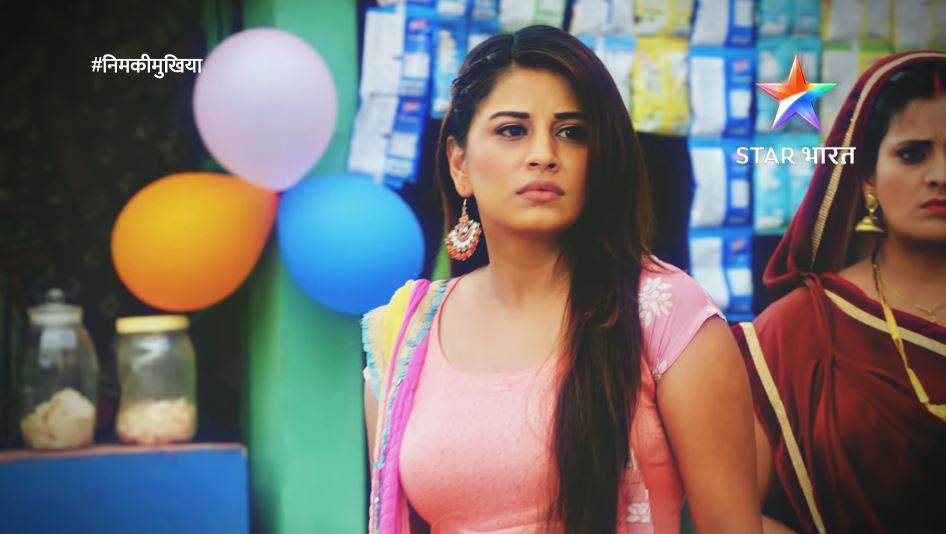 Nimki Mukhiya Muskaan Striking revelations lined Nimki gets treated in the hospital. Abhimanyu reaches the hospital when he learns the news of the cruel attack on Nimki. He gets raged on Babbu and asks him why did he do this when he made fake promises to Nimki. He confronts Babbu and goes to bash him. The family tells Abhimanyu that Tetar has done this with Nimki, and Babbu is innocent. Abhimanyu calms down and rushes to doctor to know about Nimki. Doctor tells them that Nimki is still critical. Mahua breaks down and goes to meet Nimki. Nimki smiles in the worse state. She surprises the family by her attitude. She faints down. Mahua gets worried while Nimki is attended by the doctors.

Rekha doesn’t think she can go against Tetar. She doesn’t want Tetar to hurt them. Nimki gets conscious and finds Mahua with her. The sisters have a moment of bonding after a long time. Rituraj tells Tetar that he did a mistake to injure Nimki much, if Babbu goes to police station, then everything will be against them. Tetar tells Rituraj that he can’t spare Nimki. Rituraj tells Tetar that if Anaro gets hurt, they can put the blame on Babbu. Tetar likes the idea and then pushes Anaro down the stairs to injure her. Rekha finds Tetar in his new crime and gets a shock. Anaro can’t believe Tetar’s planning. Tetar wants Anaro to lie and trap Babbu. Tetar gets Anaro treated by the doctors at home.

Anaro knows the truth. Tetar calls the police to give statement against Nimki and Babbu. Tetar asks Anaro not to be afraid and name Babbu as the culprit. Anaro gives the statement against Babbu, which shocks Babbu. How will Babbu prove his innocence this time when his parents are hell bent to ruin him? Keep reading.

Muskaan and Ronak make a new plan for the Teej. Ronak doesn’t get sleep and feels restless. Muskaan tells him that their fight against Sir ji isn’t ending, Sir ji is like a Raavan. She doesn’t want to get away from Ronak. He assures that they will be together always. He wants her to be relieved. The family celebrates Teej. Lovely taunts on Muskaan, whose Maayka is a brothel. Lovely and Bua refuse to celebrate Teej if Muskaan attends the function.

Gayatri wants to become Muskaan’s Maayka for the puja. Muskaan doesn’t want Gayatri to annoy the family for her sake. She agrees to leave from the function. Gayatri feels Muskaan is sacrificing her happiness again. Gayatri, Sir ji and family head to the temple for puja. A man attacks Sir ji and drags him to the cave. Sir ji is compelled to go with the man. Gayatri and Ronak follow him. Muskaan points gun to shoot Sir ji, which shocks Sir ji and Gayatri. Sir ji asks Gayatri to realize that Muskaan still wants the war to continue.

Muskaan calls him a big cheat and shoots him to take revenge. Ronak saves Sir ji’s life by getting shot. Ronak falls down and acts to die. Sir ji and Gayatri cry for him. Sir ji faints in shock. He finds himself in his room when he gets conscious. He shouts to find Ronak. He threatens to kill Muskaan since she has killed Ronak. He finds Ronak alive. He tells Gayatri that Muskaan had shot Ronak. Gayatri and Muskaan deny this. Muskaan tells Sir ji that she can never kill Ronak. Bua tells him that he had celebrated Teej with him. Sir ji gets stunned on seeing their pictures.

He gets confused. Ronak recalls how he has spiked the sweets and fainted Sir ji. Ronak and Muskaan tell the dark truth to Gayatri that Sir ji is cheating them again, Sir ji is Ronak’s real dad who is using Ronak for his motives. Gayatri can’t believe this and agrees to support Ronak in his plans. Ronak gets Sir ji to the mental hospital to get him treated. He wants to ruin Sir ji’s life. Ronak and Muskaan are teaching a lesson to Sir ji. Sir ji gets an electric shock and faints. Ronak takes Sir ji’s disguise to sit in the puja with the family. He makes sure that Sir ji stays trapped in the mental asylum.