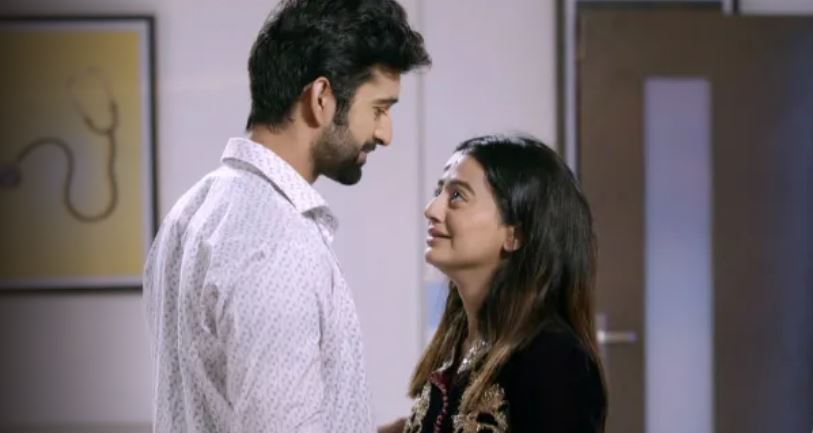 Sufiyana Pyar Mera Muskaan Upcoming Highlights Miyajaan overhears Saltanat and Nilam’s talks. He asks Saltanat if the truth is such bitter. He can’t believe that Kainat can go to this extent for Zaroon’s love. He curses Kainat. Saltanat asks him to pray for Kainat’s recovery, who needs their love right now. Miyajaan asks her if she doesn’t hate Kainat after so much happened. He tells her that Zaroon has told them about Kainat’s evil truth. He talks to her and realizes that she isn’t Saltanat, but Kainat. He doubts on her truth. Sabina tells Mamoon that Kainat has trapped the entire family. She tells him that Kainat is still playing a game with them.

Mamoon pays her money to keep his secrets. Kainat is in Saltanat’s disguise to cheat Zaroon. Zaroon tells her about the resemblance, as if the patient lying here is Saltanat. He asks Kainat to show her mehendi design. Kainat gets scared and hides her mehendi. He also doubts on her. Kainat gets angry that Saltanat got saved. Zaroon feels Kainat is in this state because of him. He wants to stay back until Kainat recovers. He asks his parents to leave for Canada if they want. Miyajaan gets to see Kainat’s identification mark.

He gets a shock and confirms that Kainat is in Saltanat’s disguise. He confronts Kainat for her big lie. He slaps Kainat and reprimands her for putting Saltanat’s life in danger again. Kainat harms him. He wants to bring Kainat’s truth out.

Bua also thinks that Sir ji is losing his mental balance. She wants him to get fine, since Sir ji manages the family expenses. Ronak messages Sir ji’s family and friends. He invites them in a party. Sir ji tells Gayatri that someone is conspiring against him. She asks him not to feel stressed. Ronak tells Sir ji that he had forgotten his phone at home. Sir ji is happy that Ronak is supporting him. He doesn’t know Ronak is doing this to take revenge. Muskaan tells Sir ji that she isn’t doing anything. Ronak takes Sir ji’s disguise and meets Bua and other family members to create a fight among them.

He tells them that his health isn’t being fine and he wants to give away their property to them. He tells Tabassum that he wants to name the brothel to her. He wants to keep his word. Tabassum gets delighted. Sir ji’s family wants the property. He wants Bua and others to clash. Bua and Lovely take good care of Sir ji when he comes home from the park. Sir ji gets to see his friends in the party and gets happy. Bua, Lovely and Tabassum argue for the property. They fight for brothel and house. Sir ji gets a huge shock when the family demands the property. Bua tells them that Ronak isn’t Sir ji’s real son and won’t get anything from his property. Ronak plans the next shocker and gets Sir ji arrested. Muskaan’s dream to get Sir ji punished gets fulfilled.