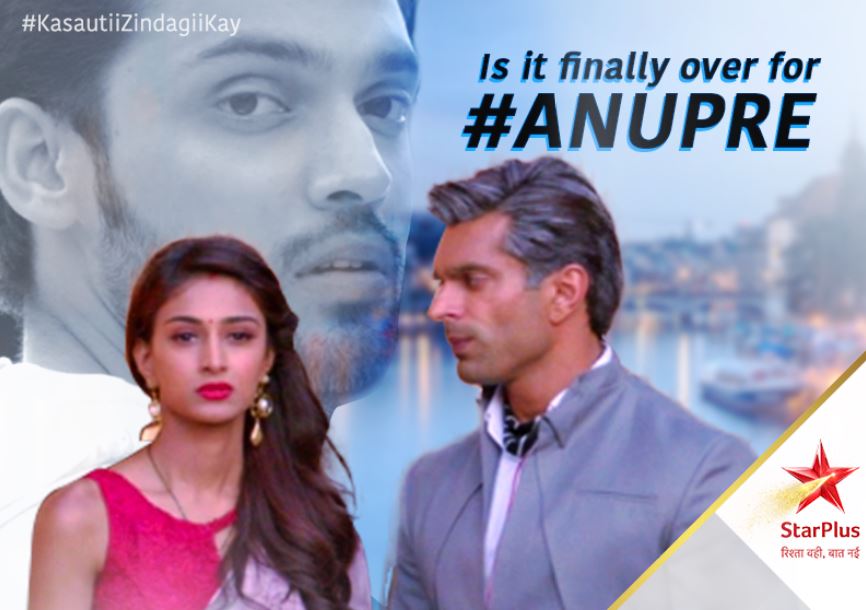 Kasautii Zindagii Past revelation; Its Over for AnuPre Anurag and Prerna get into a heated argument. He asks her to come back to him, since he has achieved what she wanted. He tells her that he has power, money and status, just like Mr. Bajaj. Prerna tells him that he has changed a lot. He reminds her words that she had changed and married Mr. Bajaj just for the sake of richness. He tells Prerna that she is his love and obsession too. She asks him to spare Mr. Bajaj’s family and not snatch his house. He asks her if Mr. Bajaj pitied him before snatching his everything. Mohini scolds Prerna for taking Mr. Bajaj’s side. Prerna begs Anurag to not hurt any family.

Anurag asks Prerna why is she begging for Mr. Bajaj. He reminds their love. He asks her to come back to him if she wants to save Mr. Bajaj from destruction. Prerna tells him that she is now married to Mr. Bajaj and now Basus don’t matter to her. She feels dutiful towards Mr. Bajaj’s family. She tells Anurag that she isn’t a toy that Mr. Bajaj and Anurag will fight for her. She wants to take her decisions. Anurag misses her and sinks in her memories. Mohini is happy that Anurag is ruining Prerna. She wants to curse Prerna.

Anupam asks Anurag not to play with Prerna’s happiness and not compel her like Mr. Bajaj did. Anurag wants to ruin Mr. Bajaj and get Prerna back. He wants Prerna to realize her mistake of going to Mr. Bajaj and repent with tears. He gets angry and blind in love. He tells Anupam that he will compel Prerna to come back to him. Nivedita is worried that Anurag may become a wrong person while doing the right thing. She is scared seeing the big changes in his behavior. Mohini supports Anurag. Prerna packs her bags. Tanvi blames her for being responsible. Tanvi asks Prerna to stop Anurag. She doesn’t know how Sneha will adjust in another house.

Maasi makes Tanvi apologize to Prerna. They are worried for Sneha. Prerna feels Tanvi is right and feels guilty. Prerna doesn’t wish to hurt Sneha. Sneha has a belief that her dad will set everything fine. Prerna too wants to believe this. She apologizes to Tanvi. She calls to find Mr. Bajaj. She learns that he has gone to Basu house. Mr. Bajaj reaches Basu house to claim his rights on the house. Mohini insults Mr. Bajaj. Anurag asks Mr. Bajaj not to beg him like Prerna did. Mr. Bajaj meets Moloy and goes to reveal his bitter past connection. Mr. Bajaj gets Basu House for his family. Mohini blames Prerna for this. Prerna finds Anurag and Mr. Bajaj’s fight hurting both the families.