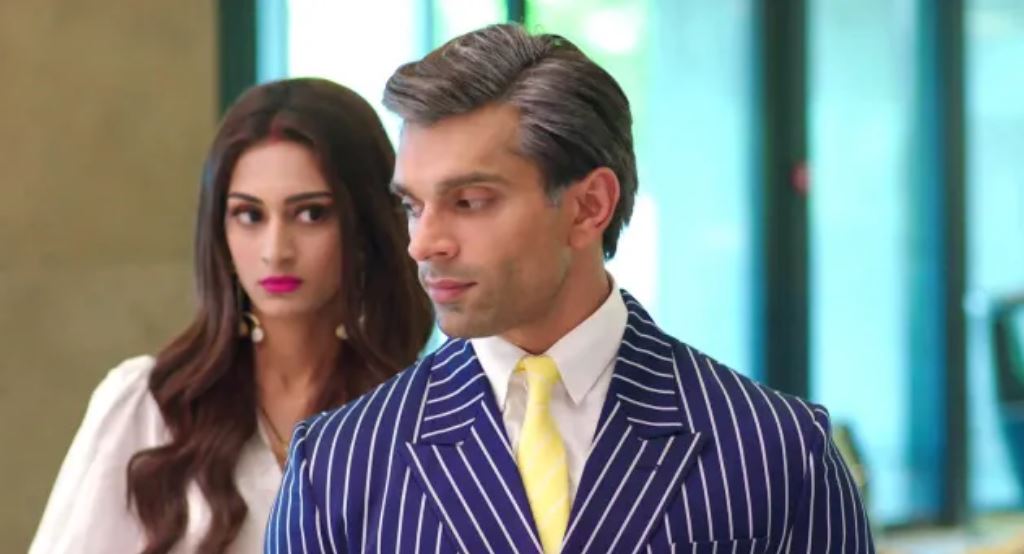 Kasautii Zindagii Kay Attack on Mr. Bajaj creates a havoc Mr. Bajaj acts goody shoes and lends free advice to Prerna, asking her to convince her mother for accepting their marriage, so that Prerna can get at peace as well. He doesn’t like to see the clashes in the family. He wants Prerna to stay happy at heart so that she can pass the happiness to his daughter Sneha. He tells her that it will be painful if Veena works in this age. He tells that he respects every mother. He tells her about inviting Basus and her family in Sneha’s birthday. She realizes that he respects his mum as well. Anurag reaches London for the new business deal. He calls Prerna and reminds her that he will move on just with her, she will have to come back to him. She wants him to forget her.

Vyas event company gets the birthday event order. Veena reaches Basu house to take care of the event arrangements. Mohini gets angry on Veena. She asks if she has accepted Prerna and Mr. Bajaj’s marriage. Veena doesn’t know what she means to say. She asks Prerna what is happening that she is here. Prerna tells her that Anurag and Mr. Bajaj have taken over each other’s houses. Veena scolds her. Tanvi finds their bad terms. She learns that Veena isn’t happy with Prerna’s marriage. Prerna tries to help Veena on seeing her working hard. Mr. Bajaj meets Vyas and asks him to give more work to Veena so that her financial expenses are met. He wants to help Veena.

Prerna misunderstands Mr. Bajaj. She thinks Mr. Bajaj wants to insult Veena. Mr. Bajaj greets Veena. He asks Veena to hand over the cash to Vyas. Prerna gets angry watching him. She confronts Mr. Bajaj for insulting her mum. Tanvi likes the drama. She rushes to call her mum to show her the dramatic fight. Prerna asks Mr. Bajaj how can he humiliate Veena. While they argue, Maasi and Tanvi get happy. Mr. Bajaj clears his intentions. Maasi makes a plan to break the marriage of Prerna and Mr. Bajaj by using Veena. She knows that Veena is against Mr. Bajaj. They also make a plan to prove Prerna as the careless mother.

When the party starts, Prerna gets Sneha ready and arrives in the party. Mr. Bajaj waits for them. He praises his daughter. Maasi is glad that he isn’t interested in Prerna. She tells Tanvi that they still have much hope. He hugs Sneha. Veena realizes that Mr. Bajaj has a little daughter. She angrily asks Prerna the reason for marrying Mr. Bajaj. Maasi tries to hurt Mr. Bajaj. Veena wants to save him, but fails. Mr. Bajaj gets hurt by the chandelier fall. Prerna worries for her husband. This attack creates chaos in the party. Maasi wants to blame Veena for this to create a rift between Mr. Bajaj and Prerna.