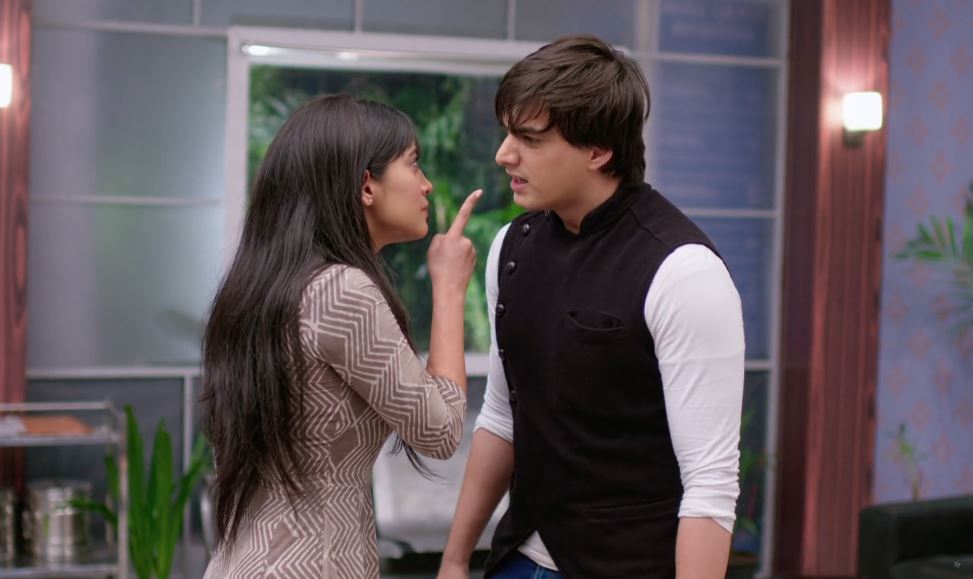 Yeh Rishta High Drama with Kartik Naira Confrontation Vedika is worried that Kartik won’t be coming home to fulfill the post marriage rituals. She doesn’t know what to tell Dadi. She knows Dadi will be surely angry on Kartik. Doctor gets Kartik’s debit card and looks for him to return it. She wants to give it to Kartik’s wife. Vedika tries to collect the card, but the doctor hands it over to Naira, thinking she is Kartik’s wife. Vedika gets upset. Naira apologizes to Vedika and gives the card. She didn’t wish to come between Kartik and his wife, but Vedika mentions that Naira has already created a rift in her marriage.

Later, Naira goes to meet Kartik. She wants him to go home and perform the post marriage rituals. She tells him that she will be with Kairav. She asks him not to make his wife wait. Kartik asks her not to teach him what to do. They have a heated argument. Kartik doesn’t let Naira go and vents his anger on her. He tells her that he had to marry Vedika because of her cheat. He tells her that she has lost all rights on him. She tells him that he had snatched rights from her by suspecting her character. He asks her to stop blaming him. She reminds his suspicion. He tells her that he just asked one question, but she has ruined their lives.

She asks him the reason for getting such a question in his mind. She feels he has ruined their beautiful relation. She asks him to leave. He doesn’t want to leave Kairav with her, since she can again disappear, this time with Kairav. He gets too emotional about missing Kairav’s growing years. He tells her that she didn’t reveal her pregnancy, which was much wrong. She tells him that he would have questioned the baby’s father as well, which she could have not tolerated, so she didn’t inform about her pregnancy. She justifies her decision.

She makes him realize his mistake. She asks him how could he ask such a thing, which he isn’t able to tolerate now. He tags her for taking revenge on him by keeping Kairav away for 5 years. She blames him for punishing himself and them as well. She asks him to accept his mistake. She vents her anger on his ill thinking. She tells him that if he knew about Kairav that time, he would have assumed Kairav to be someone else’s child. She reprimands him and settles scores with him. He feels she has changed a lot. She tells him that he changed first and changed her life as well. She tells him that she hates him. Kartik asks her if she forgot their marriage vows. She reminds that he has broken the marriage vows by breaking her trust.

Elsewhere, Manish informs the family that Kartik doesn’t want to come home for the functions. Dadi wants Vedika to bring Kartik home. She asks Vedika to find Kartik and get him home by claiming her rights. Kartik gets away and sinks in sorrow. Vedika fails to find him. Naira assures Vedika that she will never come back in Kartik’s life. She wants Kairav to get fine, so that she can leave for Goa in peace. She apologizes to Vedika again. Dadi compels Kartik to come home. Kartik argues with Dadi. He asks her not to pressurize him. He wants to be with his son. Naira is worried that Vedika will face troubles because of her. Naira goes to meet Singhanias. She hopes that they forgive her and accept her back in the family. Naira meets Naksh to celebrate Raksha bandhan. She fears of Naksh’s angry reaction.