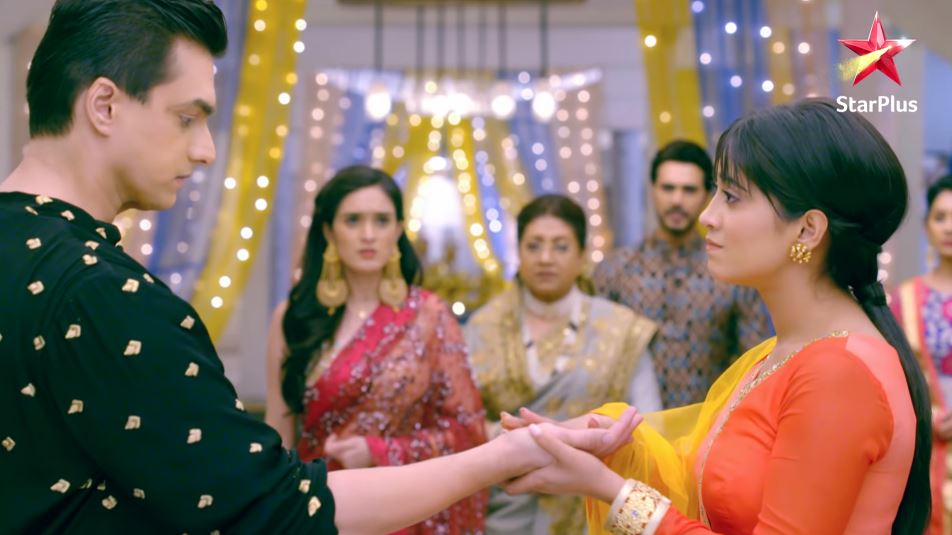 Yeh Rishta Custody Claims for Kairav Spoilers lined Yeh Rishta Kartik and Naira will be seen fighting for Kairav’s custody. Kartik gets Kairav to Goenka house and celebrates Janmashtami. Goenkas get happy when they see Kairav as Kanha. Kartik leaves a letter for Naira. She realizes that he has taken Kairav home. He tells her that Kairav belongs to Goenka house, she can’t stop her. Naira meets Kartik at Goenka house and scolds him for bringing Kairav home without her permission. She didn’t wish Kartik to claim his rights. She tells him that she wasn’t running away from them, they can meet Kairav anytime. Kartik and Dadi want Kairav to live with them. Dadi tells Naira that Kairav is the heir.

Naira wants Kairav to stay with her in Singhania house. She doesn’t want to spoil Vedika’s marriage. Kartik and Naira have a clash for their rights on their son. Kartik commits a mistake again to challenge Naira about Kairav’s custody. Naira questions his courage to attempt to snatch her son. Goenkas and Singhanias worry with the new fight. Naira reacts on Kartik’s new mistake. Naira enters Goenka house just for the sake of Kairav. She hugs Kairav and expresses her love for him. She also expresses her anger on Kartik. Will Kartik realize his mistake and apologize to Naira? Keep reading.

Patiala Babes: Babita sides her annoyance and accepts Hanuman’s proposal. She is ready to forget their differences and bitter quarrels. Hanuman helps her decide the saree to buy for the marriage. He tells her that the red saree suits her. She gets shy. Babita buys clothes for her marriage functions. Minnie helps Babita. She calls Hanuman there to help Babita in clothes selection. Babita gets happy to get Hanuman’s love. The marriage preparations will bring more of their romance. There will be entry of Babita’s sister. She arrives to attend the marriage.

Hanuman is impressing Babita’s sister Poonam as well. He wants Babita’s family to have good terms with him. Rano is surprised seeing this. She tells him that he was actually very shy before. She finds a change in Hanuman’s behavior. Poonam finds Babita’s choice good. She flirts with Hanuman to pull his leg. Rano suggests Babita to keep Poonam away from Hanuman. He has clean-intentions and just loves Babita.

Sufiyana Pyaar Mera: Zaroon is worried that Dr. Sharma was fake and had hidden intentions. He wants to know Dr. Sharma’s intentions. Zaroon feels Saltanat is in trouble. Kainat gets stressed that her old crimes will surface her truth. She is in a dilemma about Dr. Sharma collecting the skeleton for a purpose. She is happy that Kainat is blamed for it, and she can be safe as Saltanat. She doesn’t know that its a trap by Dr. Sharma.

Yeh Rishte Hai Pyaar Ke: Kuhu gets emotional on her Bidaai. She bonds with Mishti like never before. She thinks she will be missing Mishti a lot. Mishti and Abir’s return in the family brings happiness. Mishti wishes the best for Kuhu. Kuhu cries while getting away from her family. Kunal is unhappy and wants to spoil his marriage with Kuhu. He feels he doesn’t love Kuhu and its injustice with him to live with her.