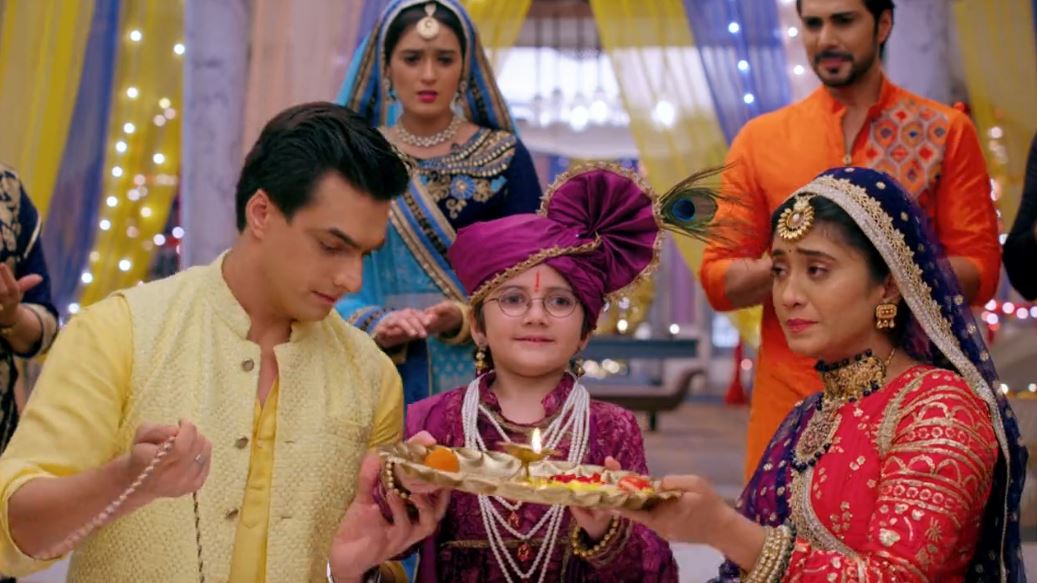 Yeh Rishta Big Question to strike Kartik Naira Kartik, Naira and Kairav perform the puja. Kairav watches the rest of the family performing the puja. He tells Naira that he feels dizzy and tired suddenly. Naira worries for him. She finds Kartik busy with Vedika. She takes Kairav to put him to sleep. She thinks too much exertion isn’t good for Kairav and he must rest now. Kartik doesn’t see them anywhere and looks for them. He thinks if Naira has gone somewhere. Naksh meets Goenkas and asks them to permit Naira and Kairav to go with him. He tells them that he has come to pick Naira and her son. He waits for Kartik to call them. Kartik realizes Naira is still at his house.

He recalls the moment to dance with Naira and Vedika. He is unhappy and guilty to do wrong with Vedika. He doesn’t want Naira and Kairav to go anywhere. He sees Naira and Kairav sleeping peacefully. He feels his family got complete with their coming. He wants them to live with him forever. He wakes up Naira and informs that Naksh has arrived to pick her. Dadi is worried and asks if Naira will take away Kairav from them. She doesn’t want Kairav to go. Kartik and Manish ask her not to worry. Singhanias wait for Naira and Kairav. They know that everyone is supporting Kartik at this time, since Naira’s mistake was bigger.

They don’t want to leave Naira alone in the storm and support her. Kartik thinks he will miss Kairav a lot and he must not let him go. He gets emotional. He scolds Naira for deciding to leave once again, all alone. Naira tells Kartik that she didn’t decide anything and Kairav himself decided to live with Kartik. She tells Kartik that she has sent Naksh back home. Naksh informs the family that Naira and Kairav aren’t coming home, since Naira has decided to stay with Goenkas for the sake of Kairav’s happiness. Naira wants Kairav to get fine soon with the support of Goenkas. Naira is sure to deal with the situation for her son’s sake. Naira takes Vedika’s permission for her stay.

Kartik and Naira get happy when Vedika permits Naira and Kairav to stay in Goenka house. Vedika wants Naira to do whatever she wants, and not ask her anything related to Kairav. Vedika is upset that Naira didn’t keep her promise. Naksh tells the family that he has done a lot to get Naira back, but in vain. Goenkas happily spend time with Kairav. They aren’t liking Naira’s stay. Kairav and Vansh play a game on phone. They hide under the table. Kartik feeds the kids with love. Kairav asks Kartik to call Naira.

Naira feels hungry. She thinks not to dine with Goenkas. She wants to stay away from Kartik and Vedika’s life. Vedika takes breakfast for Naira. Kartik sees Naira and is happy. Vedika tells her that the matter is concerning Kairav and she has no objection. Vedika wants Kartik to be happy. Naira thanks Vedika for her support. Naira tastes the food and cries realizing Kartik has prepared it for her. Kartik also feels sorry that they could have been together. Naira decides to leave soon before things go out of hand. Vansh and Kairav have a fight. Kairav asks Kartik and Naira if they aren’t married. He questions them and gets upset. He hides himself in a storeroom, creating panic in the family.