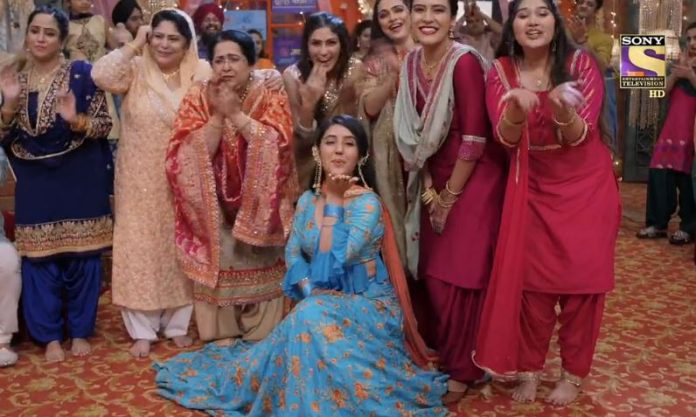 Spoilers Patiala Babes Hanuman surprises Minnie. He gets the same lahenga like Babita’s bridal lahenga. He wants them to look stunning with their twinning. He convinces them. Babita gets happy that Hanuman cares for them so much. He tells them that he knew Minnie is busy in arrangements and will forget to arrange her dress in last minute. Minnie gets emotional. She celebrates Babita’s new relation. She blindfolds Babita and adorns her with bangles and Kaleerein. She decks up Babita and also ties a black thread to ward off evil sight. She wants to ensure Minnie’s happiness.

She hopes for a happy family. Babita and Hanuman bless Minnie. Babita’s brother and his wife complete the rituals for Babita. Babita feels blessed to get a daughter like Minnie. Hanuman finally sees Babita in her bridal dress. He gets mesmerized on seeing his bride. He takes his bride to the mandap in a romantic way.

Sarabjeet calls Kulwant home to send Meher to her Maayka. Kulwant gets worried knowing Sarabjeet wants her to take Meher away. She asks Sarabjeet what’s the problem, what mistake did Meher do. Sarabjeet is worried for Meher’s coming back. He doesn’t want Param’s infection to make Meher sick. He hides the pregnancy truth from his family. He ensures Meher that he won’t reveal the truth to anyone. He thinks Kulwant isn’t aware of Meher’s pregnancy. Kulwant meets Param and stays away from him, thinking her infection will get transmitted to her. Meher knows Kulwant’s reality, that she is stone-hearted. Kulwant asks her to stay back with Sarabjeet. She just thinks of her own motives behind Meher and Sarabjeet’s marriage.