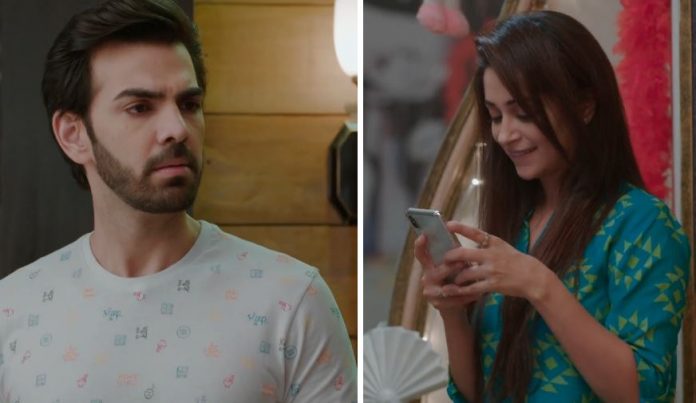 Kahaan Hum Highlights Romance Realizations and Ronakshi Rohit and Nishi plan a surprise for Sonakshi to pay the favor for her huge help. Veena gets excited that Rohit has found true love in Sonakshi. She likes Sonakshi a lot. She tells Naren about Nishi’s plans. She tells him that Sonakshi has done a big thing for Pooja. She wants to know if Rohit is ready to move on in his life with Sonakshi. She wants Rohit and Sonakshi to get married soon. She hopes that they settle down and stay happy together, shedding away the shadows of the past. Naren doesn’t think Rohit should hurry in his relationship. Naren wants Rohit to take more time in knowing Sonakshi and the Rastogi family.

He tells Veena that they should give time to Rohit and Sonakshi in order to know each other and their compatibility. He doesn’t want Rohit’s life to get ruined again. Veena is happy that Rohit has finally moved on by forgetting Raima. Meanwhile, Sonakshi misses Rohit while she goes ahead with the Ganesh Visarjan. She gets prepared to perform the puja. Suman is very happy when Netra discloses that Sonakshi will play Parvati in the show again. She tells Sonakshi that the channel is ready to apologize to her. Sonakshi feels all her problems got over. Netra asks Sonakshi about Rohit. Sonakshi badly misses him and her behavior makes it evident.

Netra and Pulkit tease Sonakshi about Rohit. Sonakshi doesn’t know if she should wait for Sippys more. Rohan messages Pari to meet her. They both flirt and have a moment. Pari falls for Rohan, knowing he is married to Tanya. She feels Rohan also likes her. Rohan is just trying to have an affair with Pari. Rohan and Pari share a romantic moment. Sonakshi takes the Bappa idol for the Visarjan. Sonakshi gets surprised seeing the band playing dhol. She thinks if Suman has planned the surprise. Rohit and Pooja surprise Sonakshi and make her talk to Nishi, who had done all the arrangements.

Nishi apologizes to Sonakshi and is ready to make a new start with Rastogis. Suman gets emotional and happy. Rohit wants Sonakshi to bid good farewell to Bappa. Rohit tells Sonakshi that Sippy family will add the fun by playing dhol with the other artists. Rohit shows his new side to Sonakshi. He gets fun loving. Sonakshi gets delighted to see the Sippys doubling the celebrations. Rohit and Sonakshi play the dhol together. They make a wish before doing the Visarjan. Sonakshi wishes to get Rohit’s love. She makes prayers that Rohit moves on in his life with her. Rohit and Sonakshi spend good time. They enjoy a lot with the family.

Rohit tells Ajit that the day was well spent with Sonakshi. He starts missing her. He tells Ajit that Sonakshi is really a nice girl. Ajit tells her that its love. Rohit gets angry on himself, realizing that he has forgotten Raima’s birthday. Rohit doesn’t want to forget Raima. He wants to punish himself for this mistake. He blames Sonakshi for this. Ajit tells Rohit that Rohit has fallen in love with Sonakshi, which is really a good sign. Ajit asks him to move on with Sonakshi. He explains Rohit that he shouldn’t ignore the signs from Bappa.

He asks Rohit to make a new start with Sonakshi. She misses Rohit and calls him. Rohit doesn’t answer her calls. He then answers her call and vents anger on her, that she made him too occupied that he forgot Raima’s birthday. He feels frustrated that he is losing Raima’s memories because of Sonakshi’s influence. He doesn’t accept that he is in love with Sonakshi. He gets on verge of accepting Sonakshi as his true love.