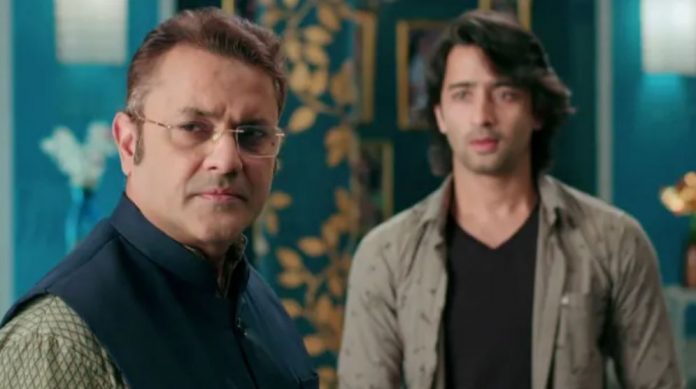 Rishtey Pyaar Shock awaits Abir Mehul returns Vishwamber and Rajshri consider Abir and Mishti’s alliance. They don’t want to do any injustice. They want to give a chance to Abir and meet him once. They want to know if Abir will always keep Mishti happy. Mishti is glad to know that Vishwamber has planned to meet Abir. Nanu also wants to talk to Vishwamber about Abir and Mishti. Meenakshi is stressed that Mehul is returning in their lives. She doesn’t want Mehul to claim Abir. Kaushal tells her that Mehul has arrived in Rajkot and now he will try to contact Abir. Meenakshi is determined to save her children from Mehul. Nanu and Meenakshi realize that Mehul’s evil.

Nanu asks her to be strong like always. Nanu tells her that she has to believe in herself. Abir wishes himself luck and goes to meet Kunal. He apologizes to Kunal. He tells Kunal that he is very important for him. He gifts Kunal his old bike and plans a ride with him. Kunal melts his heart and forgives him. He tells Abir that even he can’t stay without Abir. The brothers patch up. Abir goes to meet Vishwamber on his call. Kuhu learns that Abir is going to meet Vishwamber. She is worried that Abir may get accepted.

She finds Kunal happy after a long time. She learns about the brothers patch up. She shares this good news with Meenakshi. Meenakshi is happy that her sons are together now and will oppose Mehul when he arrives. She wants her sons to support him. Kunal gets ready for the ride with Abir. He is happy that he will spend time with Abir. Kuhu is happy for him. Abir reaches Maheshwari house for the alliance talk. He prepares for the interview and stays honest in his answers. He convinces the family by his honesty. He tells them that if a few people in his family don’t like Mishti, others like her. He asks Vishwamber to see the positives. He tells Vishwamber that he loves Mishti and wants to give her much happiness.

He tells them that Mishti is good-hearted and believes in love just because of Vishwamber and Rajshri. He wants to teach her the difference between love and helpful favours. He impresses Vishwamber. When Vishwamber questions him about Kunal, Abir tells him that Kunal already asked him to choose Mishti or him, but he has chosen Mishti. He assures that he will make Mishti’s life better.

Vishwamber gets assured that Abir will always protect Mishti from sorrow. Vishwamber and Rajshri take Mishti’s consent also. They hug Abir and bless him, giving him a positive answer. They accept Abir for Mishti. They give Mishti’s hand to Abir. Abir gets too happy. A shock awaits him. Mehul calls him to fix a meet. He tells Abir that he wants to meet him. Abir is in shock that his dad has contacted him after years.