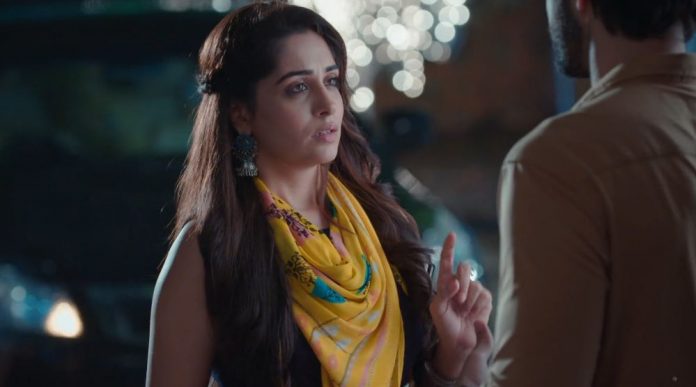 Kahaan Hum Star Prime Highlights Today Sonakshi and Rohit meet for a talk on their fake love relationship. She tells him that she finished the shoot and came to meet him. He tells her that he is also free from work now. They toss a coin to get the first chance to talk. He loses the coin and doesn’t know the fate’s decision. He asks her to complete first. She tells him that they should end the fake relationship else she will be hurt along with their families. She asks him to tell his family about their break up. Rohit is left stunned after hearing what she wants. He gives his approval and assures that he will explain his family. He doesn’t tell her about his feelings.

He lets her go, and feels the pain. He thinks he should have told his feelings to her, but in vain. Yash wants to visit his mom since Nishi isn’t home. His mom gives him a surprise visit. She tells him that she has come to live with Sippys. Yash and Pooja get a good surprise and heartily get along. Meanwhile, Ajit meets Rohit and tells him that he found Sonakshi upset when she left. He asks Rohit to confide his feelings. Rohit tells him that Sonakshi wants their break up. Ajit asks him not to obey her and not tell his feelings to Sonakshi.

Rohit gets upset imagining the scary story told by Ajit. He finds the coin and thinks fate has supported him, he has won the toss. He rushes to find Sonakshi. He calls her up and tracks her. He tells Sonakshi that he will be expressing his feelings to her. He gets too hesitant and scared to tell her that he loves her. He tells her that they are good friends. She doesn’t want to be in the friend zone. She limits him from dragging the matter.

He tells her that she shouldn’t speak until he is done. He tells Sonakshi that he likes her a lot, since she is a gem. He expresses how he admires her. He wants to see her in the place of his lover. He praises Sonakshi’s good qualities. He asks her out if she also likes him. Sonakshi tries to clear out that they are friends, and Raima is still in his heart. He wants to explain that he has forgotten Raima and wants to move on with Sonakshi.