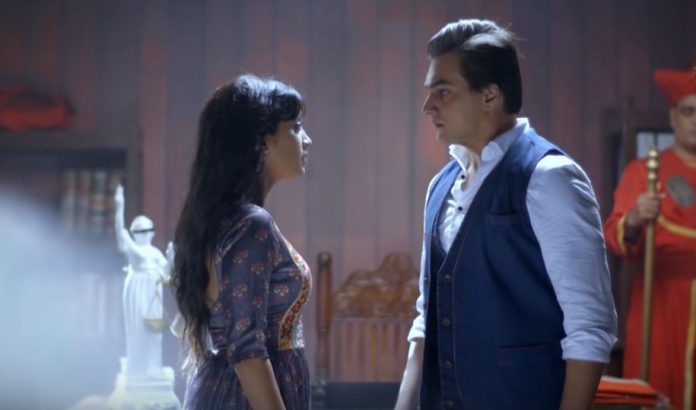 Yeh Rishta Custody drama Promo Latest Upcoming Kartik and Naira have a bitter argument when she decides to leave Goenka house. Naira wants to take Kairav with her on Vedika’s demand. Kartik takes Naira to the secret chamber, where he used to cry for Naira, assuming her dead. He tells her that he had been cursing himself all the while. She regrets to lie about her death. Naira apologizes to him. Kartik cries to part ways with Kairav. Even Kairav doesn’t want to leave Kartik. He wants to live with Goenkas. Kartik scolds Naira for making Kairav forcibly away from the family. Kairav asks Kartik to stop him. They have a moment of sorrow. Kartik then convinces Kairav to go with his mom.

Kairav gets adamant that he won’t leave. Naira takes him along, while Goenkas bid him adieu with a heavy heart. Manish pacifies a broken Kairav. Vedika reprimands Naira for using her child to trap Kartik again. Naira imagines Vedika insulting her to much extent. She breaks down. She sees Vedika everywhere. She doesn’t want Vedika to get hurt. Naira isn’t wrong, but landed in the strange situation.

Naira knows Vedika is also right on her front. She shuts her ears when she imagines Vedika taunting further. Kartik goes to meet Kairav at Singhania house and spend time with Kairav. Naira doesn’t want to snatch Kartik’s rights. Vedika finds him with Naira again. She confronts him. She tells him that she can accept Kairav, as she accepted his every relation. She doesn’t want to accept her Sautan Naira. He tells her that she isn’t wrong if he wants to meet his son. She tells him that its wrong that he is meeting Naira by excuse of Kairav. She tells him that he is bringing Naira in between and breaking their marriage. She asks him to think of her emotions.

She tells him that he doesn’t think of her and their marriage, just because of Naira. Kartik doesn’t understand her. He asks her to leave him and Kairav alone. He reprimands Vedika and asks her to just leave from his life. He tells her that it will be her call to stay in the relation or just leave, but he won’t leave Kairav. He clears out that he can’t live without Kairav, who is most important for her. Vedika vents anger on Kartik. Singhanias witness the fight and get too upset.

Naira overhears their bitter conversation and falls in the tangled dilemma. She doesn’t know what to go, how far to go to get Vedika’s life back on track. She can’t leave Singhanias on Vedika’s new demand. She finds Vedika in trouble and saves her life. Vedika gets grateful to Naira. She is insecure that her marriage will be void if Naira gets the rights of Kartik’s first wife. Vedika wants Kartik to divorce Naira. She shocks Naira about the divorce plea. Kartik doesn’t want Naira to separate Kairav from him. He gets upset when he meets Naira in the court to fight for Kairav’s custody. Naira is helpless since she can’t love with him and away from Kairav. What will be the outcome of Kairav’s Custody? Keep reading.