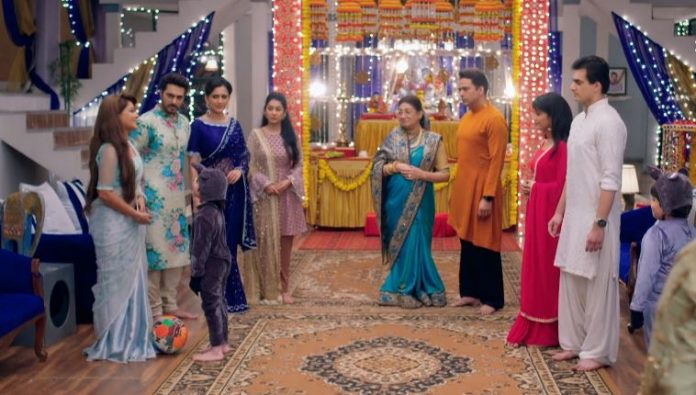 Yeh Rishta and Rishtey Pyaar Spoilers This week Naira brings Kairav to Singhania house, where they get a warm welcome from family. Everyone loves Kairav. They hug Naira and ask her to live her life as she wants. They want to support Naira always, knowing she has undergone many problems in life. Naira is upset thinking of Kartik’s sorrow. She wants to talk to Kartik about Kairav’s health certificate. She gets restless to inform Kartik. She doesn’t want him to misunderstand him. Naksh comforts Kairav. Bhabhimaa and Devyaani pamper Kairav so much. They want Kairav to adapt to the family and not get stubborn to return to Goenka house. Naira gets apologizing to them for keeping them in darkness until now.

She promises to share everything with them now. On the other hand, Vedika knows Naira and Kartik love each other a lot. She is insecure that Naira is getting back into Kartik’s life. She vents out anger, and hurts Naira’s heart. Naira follows Vedika, knowing the latter is rushing to commit suicide. She saves Vedika’s life. She doesn’t want Vedika to lose out. Singhanias feel sorry that the society will regard Naira wrong for coming back in Kartik’s life and ruining his marriage with Vedika. Naira is scared to get her pure relation misunderstood.

Meenakshi gets Mehul attacked by the goons. She wants Mehul to not meet Abir ever. Mishti finds some goons beating up Mehul and trying to kidnap him. She gets to see Mehul, whose life she saved in Mumbai. She saves Mehul’s life again. She stops the goon and beats the goons. She asks the people to help her and call the police. The goons run away. Mishti asks Mehul to tell her about his family, so that she can call them for help. Abir reaches Mishti and finds her saving Mehul. He asks Mishti is she fine. He gets to meet Mehul again.

She tells Abir that she is fine, but the man she saved is in danger again. They don’t know Mehul’s identity. They think why is destiny bringing Mehul in their lives. She tells Abir that they are becoming Mehul’s saviors again and again. She tells how the goons were beating the man mercilessly. Abir rushes Mehul for aid. Mehul names Abir, which leaves Mishti shocked. Mishti learns Mehul is Abir’s dad.