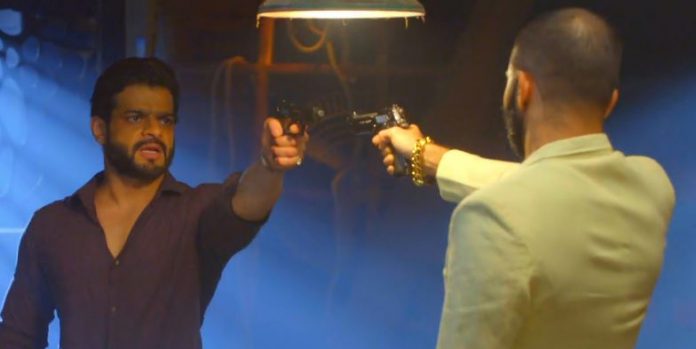 Mohabbatein Karan Patel Raman entry brings lots of twists Bhuvan alerts Arijit that Mansi may mention his name and expose his truth. Arijit isn’t scared of anything. He is sure that Mansi will never take his name since she is already sunken in the guilt of shooting a person. He tells Bhuvan to keep an eye on Ishita. He gets preparing to meet Bhallas to pay condolence for Ishita’s death. He is happy that everything is going on well. He recalls the smart way in which he has deleted the cctv footage of the hospital and also shifted Neeti to his home.

He had taken the disguise to execute his plans. Sudha is worried for Ishita. She gets the best doctors for Ishita. She tells Raman that Ishita will soon recover from the deadly attack. She gives him courage. Karan and Yug also become Raman’s support. Ruhi reaches the police station to know if Mansi accepted her crime. Mansi gets mentally unstable thinking that she has shot Ishita. She doesn’t know that the shooter was someone else. Mansi tells Ruhi that she wants Ishita to die, since Bhallas are wrong. Ruhi scolds Mansi for her evil motives.

She asks inspector not to believe Mansi’s drama, its just to save herself. Inspector wants to give fair chance to Mansi. He reminds that Yug was also framed the same way in the murder case. Ruhi is upset and calls up Karan to share the matter. She tells him that she will be going home to break the bad news. She meets Bhallas and informs them about Ishita’s critical state. She tells them that Mansi has shot Ishita. Ruhi heads back to the hospital, while the family is much worried for Ishita. Raman doesn’t want to go home, until Ishita gets conscious.

He wishes that Ishita stays fine. Raman learns about the blood units required. Raman goes to change, while the family tries to save Ishita by donating matching group blood. Bhuvan learns that Ishita is alive. He informs the shocking news to Arijit. Doctor confirms that Ishita is out of danger. Arijit gets hyper and shouts much, which worries Neeti. Neeti reacts much. Arijit pacifies her. He doesn’t want his daughter to suffer. Arijit wants Ishita to die. He asks Bhuvan to kill her. He can’t believe that she survived again.

The family tries to take Ishita home. She doesn’t get discharged soon. Raman gets a huge shock when the lab technician names someone else as Ishita’s husband. This confused Bhallas. She tells them that she has met the real Raman Bhalla, who took care of Ishita and also donated blood. The family doesn’t know how can this be possible. They want to meet the real Raman. They wonder if anyone is conspiring against them again. Simmi hides the matter from Raman and Ishita. Real Raman contacts the family. Arijit gets the shocking news that real Raman is alive. He wants to find the truth. The new twist brings the real Raman, Karan Patel back in the show.