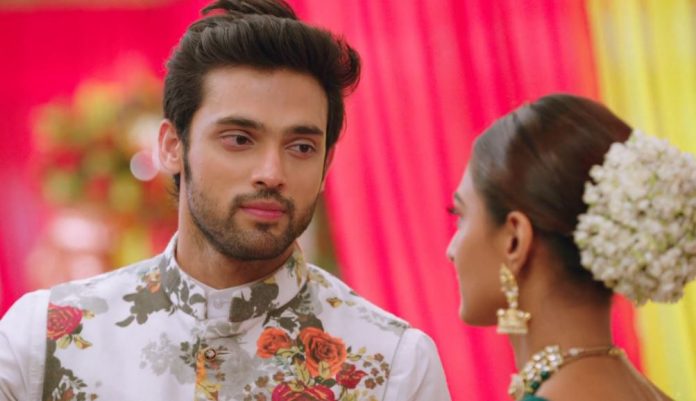 Kasauti Anurag Prerna Crazy love Bajaj senses a shocker Prerna and Anurag spend time together like always. They forget the people around them and even Mr. Bajaj. Anurag is happy to play with Mr. Bajaj’s mind. He wants to anger Mr. Bajaj more and more. Maasi doesn’t want Mr. Bajaj to see them, since he may feel bad. She thinks Prerna still loves Anurag. She is fine with this, but doesn’t want Mr. Bajaj to fall for Prerna. She wants Mr. Bajaj to marry Tanvi. Prerna shows her concern towards Moloy, which doesn’t affect Mohini. Anurag gets pleased to see Prerna with his family. Mr. Bajaj doesn’t feel anything. Prerna gets happy when Moloy blesses her.

She shares her happiness with Anurag. He tells her that Moloy loves them, since this same moment happened with him. They reminisce the old times when they fell into similar moments. Anurag reminds her the times when he filled sindoor in her hairline. He thinks of past moments and their early encounters. He tells her that they got blessed by Mata rani and also the people around, when they had nothing in between them. He tells that they were brought together by destiny. He feels nothing has changed in a year’s time. He expresses his love for her. She asks him not to say anything further, since she won’t be able to handle it.

He finds her crying a lot and asks her to reason our her tears. Prerna tries to keep him away. She is much loyal to her husband. She doesn’t know that Mr. Bajaj is watching them, but still she keeps Anurag away. Kasauti Anurag and Prerna spend some time together while connecting through their heart. They feel like time has stopped and they still have that true love around them. They think of their past, where they used to live carefree and totally in love. They wish to get back those times. Anurag shows his rights on Prerna, even when she is someone else’s wife now. He doesn’t let her stop him from showing his true concern.

Mr. Bajaj can’t help it than getting jealous. He warns Anurag against his cheap tactics. Anurag doesn’t care for this anymore. He is happy to know that Mr. Bajaj is an evil man and doesn’t deserve Prerna. He wants to get Prerna back. Mr. Bajaj thinks to knock him out of his way some how. Maasi tells Tanvi that even if Mr. Bajaj is after Prerna, they should leave their rights on his property. She wants his property. Mohini tells Tapur that she would like Anurag to lose in his fight with Mr. Bajaj, if its about winning Prerna.

She doesn’t want Anurag to be with Prerna. She hates Prerna and makes it evidence. Prerna tries to help Mohini in the puja arrangements. Mr. Bajaj thinks of Prerna that he loves her and wants her desperately. He feels that he wants her for himself as well. He wants to talk to her. She asks him to attend puja first and then they will talk.

He agrees to her, being smitten by her completely. He thinks he won’t let Anurag snatch her. He presents his crazy side once again. Prerna rushes to perform the aarti with the family. She gets her chance after everyone else. Anurag helps Prerna in time, which gives him a chance to perform the aarti with Prerna. Moloy is the only one who gets happy seeing them, while Mohini, Maasi and Mr. Bajaj get angered. Prerna wishes to get Anurag back, the person she loves. She gets to see the same old Anurag again, the true lover and genuine person.

She loves him a lot and wants him back. She doesn’t know if her prayers are right. Anurag tells Mr. Bajaj that he will soon get Prerna back. He asks Mr. Bajaj to get ready to lose his wife. Mr. Bajaj gets a huge shock when Prerna’s Mangalsutra breaks down. He can’t believe that Prerna is breaking her loyalty and going close to Anurag. Mr. Bajaj decides to make a final strike at Anurag. With this, his truth will get exposed in front of Prerna, who would dump him and get back to her true love Anurag. Kasauti Anurag Prerna union seems close.