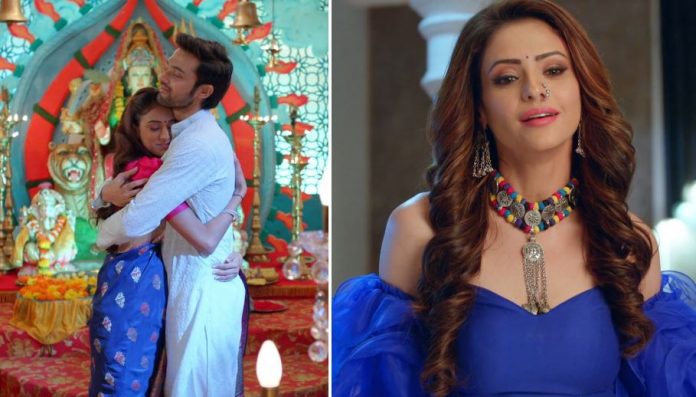 Kasautii Zindagii Anurag Prerna union Komolika vengeful Mr. Bajaj shocks Anurag and Prerna yet again by his unexpected move. This time, the shocker is a positive one. Anurag can’t believe that Mr. Bajaj is actually freeing Prerna from the unwanted marriage. Prerna tells the family that Mr. Bajaj is divorcing her. The family was too curious to know about the papers. They get a sigh of relief knowing Mr. Bajaj is backing out from the battle. Mr. Bajaj shares his heart out emotionally. He tells them that he has separated the true lovers. He reveals that Prerna has sacrificed everything for Anurag’s sake and when she had nothing with her, she was ready to give her life for Anurag.

He tells that Anurag loves Prerna, they should get married. She clears her stand that she hates Prerna and doesn’t want her as Bahu. Moloy gives her a simple choice. He asks her to accept Prerna or lose Anurag. She gets threatened. On the other hand, Prerna is still dutiful towards Cookie. Mr. Bajaj is deeply touched by her goodness. He tells her that Anurag will be marrying her tomorrow. He apologizes to her. He wants to share his feelings with her. He limits himself. He tells her that he has organized the marriage, he has done wrong to snatch her love.

He asks her to always remain Cookie’s mum and stay in contact. She promises so. He asks her to tell Anurag about her pregnancy. He thinks Anurag deserves to know that he is going to become a father. She thinks to tell the truth to Anurag. Mr. Bajaj realizes his love for Prerna. He tells that Prerna has taught him the meaning of true love. He wants to sacrifice his love for the sake of her happiness. He sheds tears of sorrow. Anurag and Prerna are very happy that they are uniting. They love has won by crossing all the odds.

Elsewhere, Komolika gets ready to make a comeback in Anurag’s life. She has no idea that Mr. Bajaj is getting Anurag married to Prerna. She assumes Anurag is single and will value her love more from now. She gets excited to meet him. Prerna wants to tell Anurag about his child. He expresses his love for Prerna. He tells her that he wants to fill sindoor in her hairline. He asks her to promise him that she will never deal with such worst situation alone and share all her troubles with him. He tells that they are strong together and very fragile when they are alone. Prerna knows he is right.

She promises to share everything with him. He regrets whatever happened in their lives. He tells her that he wants to marry her soon. He fills her hairline with sindoor. Mohini chooses the option to accept Prerna. She doesn’t want to lose Anurag. She makes arrangements for Anurag’s marriage. Komolika gets the news of the marriage. She gets angered. She wants to snatch Anurag from Prerna.