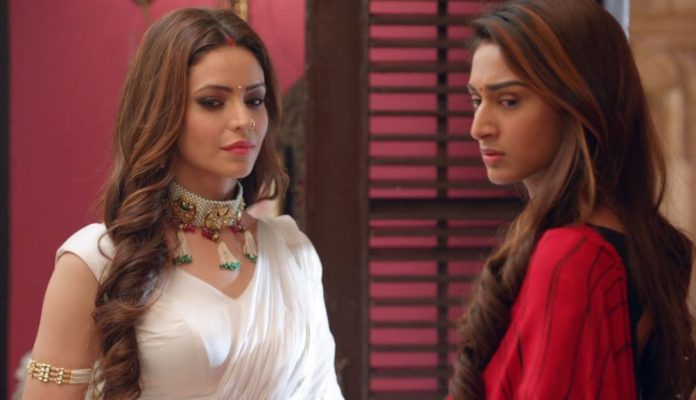 Kasautii Zindagi Prerna loses Komolika secret reveals Komolika cleverly tricks Basus by the fake marriage video. She feels they are really fools to believe her so soon. She recalls her plans to cheat everyone by the fake video. She convinces the family that she has married Anurag and saved his life. She tries to emphasize that Anurag took the step of marriage just to save her from the forced marriage. She is thankful to Anurag to give her a good life. She hopes to fall in love with him, knowing the fact that destiny has brought them together. She tells Mohini that destiny has united them in a way that they both save each other and become a medium of survival and hope.

She knows Mohini is the weak link in Basu family. She targets Mohini emotionally. Mohini gets impressed by her destiny talks and believes her. Mohini tells her that she will accept her as her daughter-in-law. She always wanted Anurag to marry someone like Komolika, but not evil. When she gets Komolika’s looks with goodness packed in Sonalika, she gets too happy and heartily accepts her in Basu family. She feels destiny has been good for them. She is grateful to Komolika. She gets upset on seeing Prerna.

Meanwhile, Basus call a doctor for Anurag’s treatment and diagnosis, even when Komolika provides them the reports. Prerna meets Anurag and asks him to come back to her. She wants him to talk to her and get recovered. She gets emotional while reminding him their marriage day. Doctor tells them that Anurag shouldn’t get reminded of the past, else it will be worse situation for him. He confirms that the reports brought by Sonalika are accurate. Mohini is worried that Anurag’s state is so fragile. She doesn’t want to take any risk. She thinks to send away Prerna from the home. She interrupts Prerna and asks her to leave the house.

She doesn’t want Prerna to play with Anurag’s life. Prerna angrily refuses to leave. She tells Mohini that she will be with Anurag, since she is his wife. Mohini doesn’t think that their marriage happens. She doesn’t regard Prerna as Anurag’s wife. She asks Prerna to not be adamant to risk Anurag’s entire life and well being. She tells that Anurag is facing a memory loss and he can’t be compelled to recall the past. Moloy too worries for Anurag’s health. He also asks Prerna to return to Sharma family.

Doctor confirms about Anurag’s retrograde amnesia. He asks them not to push Anurag towards the past memories, else he may slip in coma or lose his life. Mohini gets a big shock hearing the big consequences. Prerna can’t believe it. She doesn’t want to risk Anurag’s life. She loves him a lot. She is ready to sacrifice her love once again for the sake of his life. Komolika tries to remind the family that Prerna can’t stay with Anurag, else they would lose him. She lets Prerna meet Anurag for the final time. Prerna with a heavy heart bids a farewell to Anurag.

Komolika pities her and feels victorious to defeat her. She plans to kill Prerna. Prerna gets out of her way by deciding to leave Basu house. She wants Anurag’s happiness and safety first. Mohini gets glad that Prerna got sense finally. Prerna leaves from Anurag’s life. Komolika changes her mind and spares Prerna’s life, which has already become sorrowful. Prerna will soon be learning the big truth about Sonalika’s identity. Komolika’s identity will be revealed, after which Prerna will decide not to give up and fight for her love Anurag. The love drama will get looped once again with a new battle beginning between Komolika and Prerna.