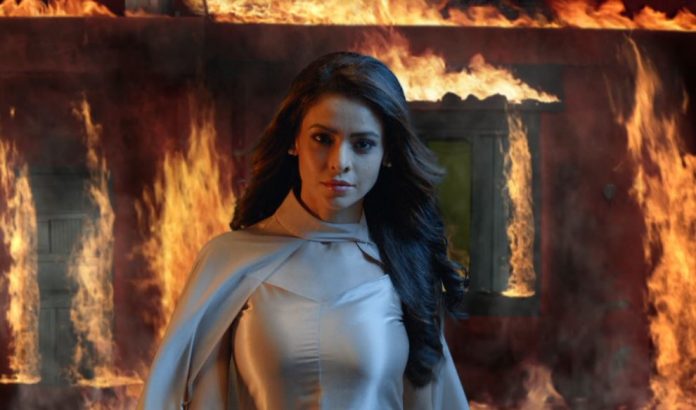 Kasauti Zindagii StarPlus Komolika fiery shocking move Prerna is much remorseful that Anurag has completely forgotten her. She shares her pain with Shivani. She tells Shivani that Anurag who madly loved her has forgotten her, such is their fate that they can never unite. She still keeps hopes that she will get back her love, Anurag. She realizes that her true love is much strong and will help Anurag regain his memories. She doesn’t want to lose hopes. Shivani consoles her. She wants Prerna’s belief to turn true.

On the other hand, Komolika is much upset that Prerna is still in Anurag’s heart if not in his mind. She is angered up that Prerna has held a place in Anurag’s memories, due to which he isn’t moving on with his wife. She doesn’t know why Anurag doesn’t like her and keeps distance from her when she is his wife and also good unlike Komolika. She doesn’t want any wall between Anurag and her. She decides to get rid of Prerna so that it doesn’t get too late. She gets help from her dad. She plans to put Prerna in trouble. She tells Anurag that she will be back in some time. She hires a goon and commands him to burn Prerna’s house to ashes. She doesn’t want Prerna or her family to die. She just wants them to suffer.

She wants to see how Prerna manages her family during hardships. Komolika tells him to not harm any life. The goon agrees to keep the fire limited to just harm the house. She ruins Prerna’s peace and happiness. She wants to snatch everything from Prerna. Komolika’s aide burns Prerna’s house. Prerna and her family find the house on fire. They rush out of the fire to save lives. Prerna asks them to go out until she gets her dad’s photo. She saves the photo, while Veena gets hurt being concerned for Prerna.

Prerna is much beloved by her family. Veena loves her a lot. She protects Prerna. Veena faints down. Shekhar and Prerna take her away. They take shelter at a relative’s house. They get help. Veena keeps her self esteem. She decides to go to her village and start a new life. Anurag asks Anupam about his life’s unknown chapters. Anupam gives him hint about Prerna. He then worries that Anurag may collapse. He lies to Anurag. He doesn’t let Anurag pressurize his mind. He asks Anurag to trust him, he will answer all his questions and clear his doubts with time.

Meanwhile, Komolika visits Prerna’a house and loves the blazing sight. She feels Prerna’s life is over now. She has won and snatched everything from Prerna. She wants Prerna to suffer all her life. Anurag finds Mohini in pain because of his curiosity to know his past. Moloy assures Anurag that everything is fine. Komolika wants Prerna to shed tears of sorrow. Prerna pacifies her family and becomes their strength. Komolika feels she has made Prerna out of Anurag’s life. Her vampish move gets Prerna back into Anurag’s life. Anurag and Prerna will get together again.